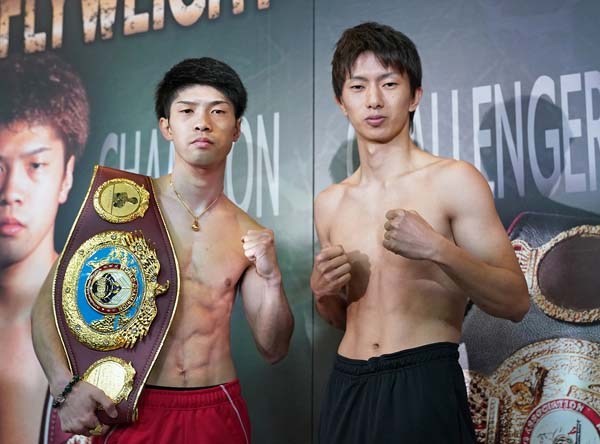 When both of them were light-flyweight champs two years ago, the WBO ruler Tanaka sustained an optic injury to have the unification title bout with Taguchi, then the WBA titleholder, cancelled despite people’s great expectations. Time has come for Tanaka to wipe off a disgrace that some people then castigated him for his alleged escape from his showdown with Taguchi.

They participated in a weigh-in ceremony at the CBC Television hall today with each tipping the beam at the same 112-pound class limit.

Taguchi, an inch and a half taller than the enfant terrible, successfully kept his WBA 108-pound belt on seven occasions to his credit before his forfeiture of the diadem at the hand of South African Hekkie Budler partly due to his severe reduction of weight in May of the previous year. He decided to move up to the 112-pound category, and then it was Tanaka’s manager/promoter and ex-WBC 122-pound champ Kiyoshi Hatanaka that made an offer to Taguchi’s handler Hitoshi Watanabe for a well-received grudge fight. Tanaka outgrew the flyweight division earlier than Taguchi, and captured the WBO belt by edging defending titlist Sho Kimura in the Fight of the Year last September. This will be Tanaka’s initial defense of his WBO belt.

Fight fans outside of Japan will be able to watch this sensational encounter LIVE with the following FREE streaming: https://www.youtube.com/watch?v=L0N1dbnw698 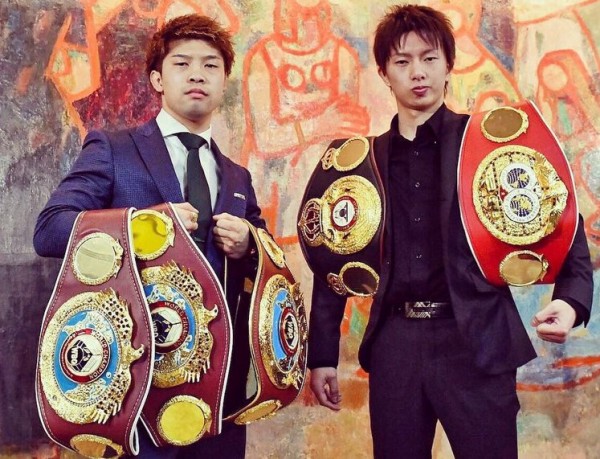 One of the best bouts of the year!

CBC proudly announces the streaming of the bout

for free on http://www.asianboxing.info/ worldwide*.

*For domestic audiences, the program will be available on TBS Network 28 channels.

Kosei Tanaka became the quickest fighter to become a 3 weight world champion, doing so in his 12th professional, bout last September. The bout with Sho Kimura was wild and Kosei won the title by a hair. The bout itself was chosen as the WBO’s Best Fight of 2018, and was widely regarded as one of the best fights of the year by independent publications, and was a great opportunity for Kosei to show his exciting style to boxing fans all over the world.

Kosei had been keen to face Ryoichi Taguchi, who won WBA Light Flyweight Champion, for years. The best chance came in 2017 however plans were cancelled due to Kosei suffering a serious injury in September that year. During Kosei’s time recovering from his injury, Ryoichi defeated Milan Melindo on new year’s eve 2017 and became Japan’s most recent unified champion, adding the IBF title to his collection.

Since then, Ryoichi has lost the Light Flyweight belts and now is heading to the Flyweight division, and the WBO title. Kosei says the bout with Ryoichi is “destiny” and he states the fight will be his best bout.

As a boxer from the Chubu region, CBC supports Kosei from his debut. Our mission is to build his fan base from different countries and we strongly hope the streaming will increase expose between Kosei and his fans living in a variety of countries.

As well as the fantastic main event, the undercard will also be streamed to an international audience. This gives fight fans a chance to see not only the brightest talent in the Chubu region but also other emerging talents like Kento Hatanaka and Konshin Takeshima, who between them have scored 9 wins, all by knockout, and former Japanese Youth champion Takuya Mizuno. 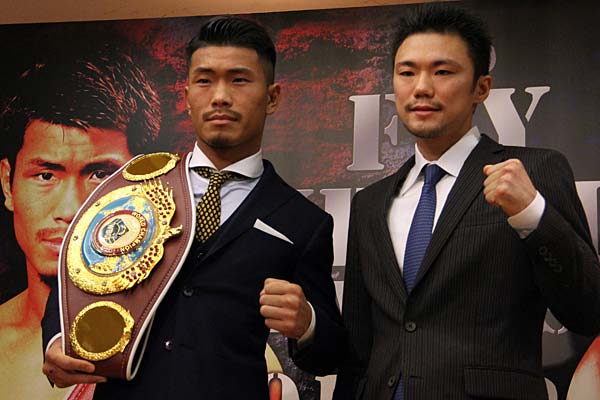