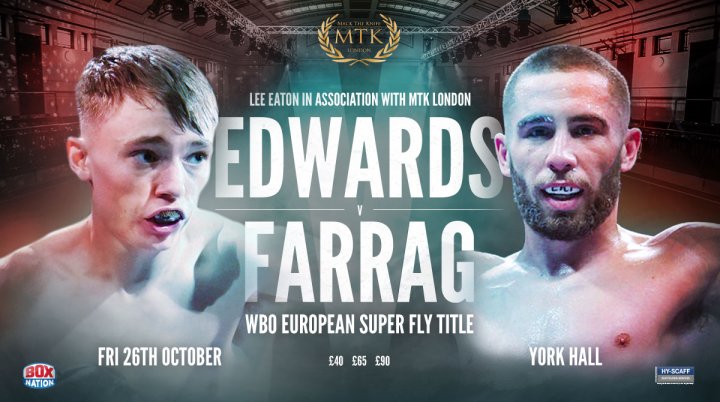 Tyrone McCullagh is zeroing in on WBO European title rival Josh Kennedy ahead of their hotly-anticipated clash at Belfast’s Titanic Exhibition Centre on October 5.

‘White Chocolate’ won the Celtic Jr. Featherweight crown last time out and steps up again to face another 11-0 fighter in Kentish visitor Kennedy, who is covered in body art.

McCullagh said: “Those face tattoos of his simply provide me with targets to aim for.

“I don’t know the guy and I don’t even follow him on social media so I’m not going to start any fake ‘beef’ but my mates have sent me screenshots of his posts. Let’s face it – he’s a muppet.

“Despite his tattoos and fashion sense, I’ve nothing against him really and he’s another step up for me having been English champion.

“I’ve seen a few clips of him on YouTube but I tend to focus on myself rather than on my opponent. I know he had a split decision win over Michael Ramabaletsa, who’s not got a great record but it’s slightly misleading because he took Ryan Doyle very close.

“The bottom line is that Kennedy is an undefeated fighter like myself but I don’t believe that he’s been in with the same calibre of opponent as I have up to this point.

“It’s nights like this that inspired me to start boxing in the first place. It’s been a long, hard road but finally I’m reaping the rewards.

“When I beat Kennedy, I’ll be knocking at the door of the top 10 in the world.”

London’s Edwards (8-0-KO3) and Liverpudlian Farrag (19-3-KO5) collide at the home of British boxing on a card that also includes world ranking fights for their MTK Global team-mates Neslan Machado and Michael McKinson.

MTK London promoter Lee Eaton said: “It’s great to be back at York Hall, which has played host to some of the great British fights in boxing history.

“Hopefully, we have another classic on our hands in the headline act of Edwards v Farrag with both men looking to get their hands on a major title before moving on to world level.

“MTK Global events just keep getting bigger and better and improvement is what it’s all about. We want to bring the fans exactly what they’re after.

“We’re delighted to be joining Jack on his journey and we believe that journey goes right to the top.”