Usyk Aims For The Goal of Unifying Cruiserweight Division 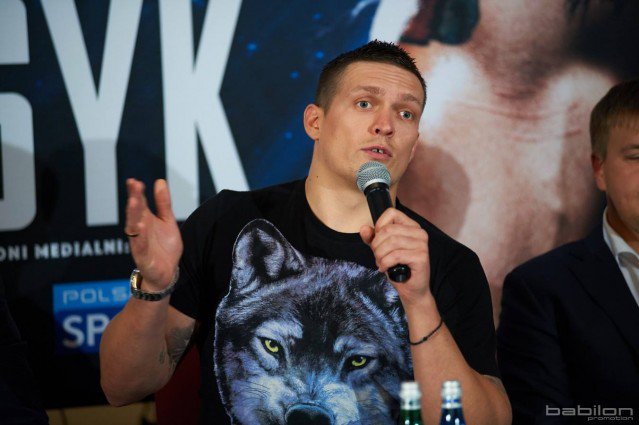 When he’s not punching someone in the face, Oleksandr Usyk can usually be found with a smile on his face, a joke coming out of his mouth, magic tricks, or maybe even a song bellowing out to the world. In the process, it’s made the WBO cruiserweight champion pretty popular these days.

He shouldn’t be. In a division that has always had good fighters but often fell short in terms of crossover potential and charisma, the 30-year-old Ukrainian is bringing new life to the cruiserweights. But as far as he’s concerned, he’s just being himself.

“If I am smiling, if I am laughing, that’s a true laugh and a true smile,” he said. “If I need to be serious, I am serious because I have to be serious at that point. Since I was a kid, I always was happy, I always was joking. I like jokes, I like comedy movies, I like to talk to people, and I just want to be myself. If I’m going to go to the fight, I am serious and I put my mind into it. If I need to be aggressive, I’ll be aggressive. But the most important thing for me is to be myself.”

This Saturday, the American introduction of Usyk continues with an HBO-televised title defense against fellow unbeaten Michael Hunter at MGM National Harbor in Oxon Hill, Maryland. In December, Usyk fought on U.S. shores for the first time as a pro, dispatching Thabiso Mchunu in nine rounds at The Forum in Inglewood, California.

It wasn’t a flawless performance like the kinds turned in from friend and fellow world champion and 2012 Olympic gold medalist Vasyl Lomachenko, but it was a fun fight to watch and one that made you want to see him again. This weekend, it’s time for him to build off that effort against another 2012 Olympian in Hunter.

On paper, it’s a marketable fight between two boxers with similar pro records, but Usyk’s 11-0 (10 KOs) looks a lot different than Hunter’s 12-0 (8 KOs) when it comes to quality of opposition. Then again, as Usyk points out, the past means nothing when they still have to fight on Saturday.

“Everybody has his own road and his own way,” he said. “He (Hunter) went that direction, I went this direction, and I can’t determine who had the harder or better amateur career. We will see on April 8th.” What does bear watching is if Usyk can continue to build his fan base here in the States, and with K2 Promotions and Klimas behind him, that’s a given if he keeps winning impressively. Of course, that doesn’t make the time away from his family back in Kiev any easier, but that is a price he’s willing to pay.

“I’m focusing on what I’m doing, and right now I’m focused on my fight on April 8th,” Usyk said. “If I’m going to be thinking about family or how hard it is to be here…this is my job. Everybody knows that I came here to do my job and that’s what I’m focused on. Of course, I think about my kids, I talk to them, and this is what gives me the motivation. I talk to my wife and my kids and I miss them, but I am here for the job. And as soon as it’s done, I’ll go back home and spend a lot of time with my family and we’re gonna laugh, joke and have a good time.”

First there’s work to be done, and with new trainer Russ Anber in the corner, Usyk is determined to dispatch Hunter and move on to the business everyone is asking him about, and that’s unifying the cruiserweight crown.

“I would like to unify the titles,” he said. “And if we can meet each other and find out who’s the best, who’s the real cruiserweight champion, that would be ideal.”

It also used to be a fairly easy task when there were three sanctioning bodies, but now with four “major” belts and some multiple titlists in particular organizations, Usyk can conceivably be looking at five fights to get through each belt holder. Add in promotional entanglements and the politics of making a unification fight, and it could be more trouble than it’s worth. But if it gets to that point, Usyk has no intention of dealing with such issues. He’ll simply accelerate his move to his final frontier – the heavyweight division.

Then the real fun begins.