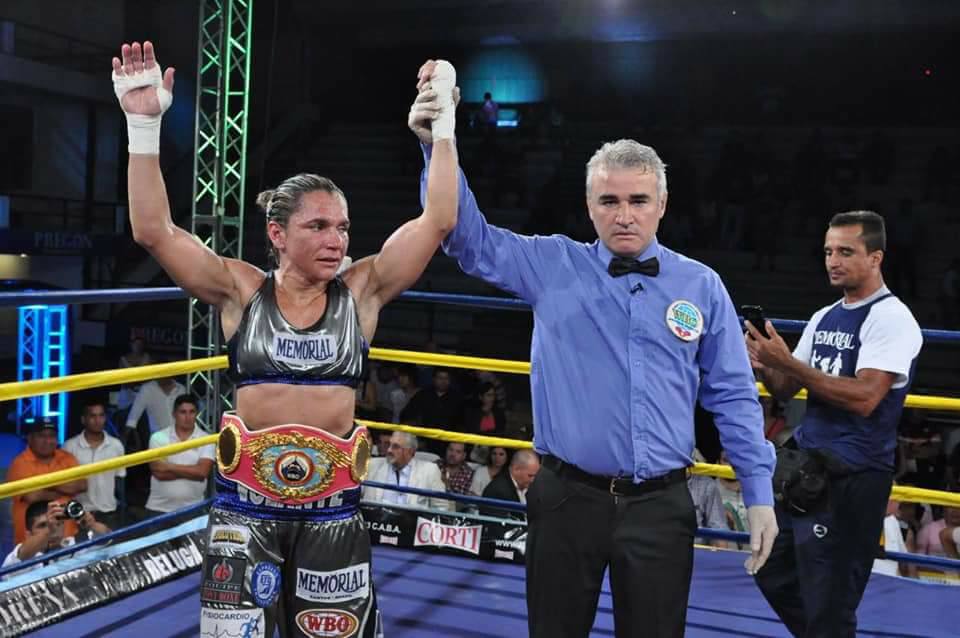 The boxer faces the Irish next Friday (15), in the fight that will be the biggest challenge of his professional career

Eleven years after beginning to practice boxing to send obesity to the canvas, Rose Volante has the biggest challenge of the professional career. On Friday (15), the Irishwoman and Irish Katie Taylor will put three belts at stake in the fight scheduled for Philadelphia in the United States.

World champion of the lightweight category (up to 61 kg) by the World Boxing Organization, Rose The Queen Volante (Memorial), 36, faces the Irish, 32, owner of the lightweight belts by the World Boxing Association and the International Federation of Boxing. A clash that in addition to the titles involves two undefeated boxers. Steering wheel has 14 wins in 14 bouts, eight of them by knockout. In 12 fights, Taylor has 12 wins, five by knockout.

From the beginning in the sport, when the goal was to see the balance pointer drop from 105 pounds, Rose took a liking to the noble art. Highlighted in amateur boxing, went to London Olympics as a reserve in 2012 when his opponent today won the gold medal.

Professional since 2014, The Queen dreamed of the world title, which came in 2017, against the Argentine Brenda Carabajal. First Brazilian boxing world champion, Rose wants more. In conversation with The Tribune , she spoke about her life and her goals.

What has changed in these 11 years of boxing, almost six of them as a pro?

A : At the beginning it was just a fight for me to have the feeling of getting into the ring. In 2014, I made the debut (professional) in Rebouças and took the first step towards the world title, won in Argentina in 2017. My love and my will to fight remain the same. Now we’re looking for something new. This fight has a greater weight, three belts are in play, the anxiety, the adrenaline, the will are a thousand.

What is it like to face this challenge that is worth three?

A : They are thinking of the fight as the most anticipated female boxing pro. It’s a tough fight for the two world champions. She has a great career in the amateur, I started later, but I also had a story in the amateur. I’m training enough to go home making history, like we did in Argentina. Once the belt is in play, he is at the table, he has no owner. The fight will be decided in cimadoringue.

You said in an interview that the belt is like a son. How is it to put a child in dispute?

A : Yeah, he (the belt) made it a year now, it’s my baby (laughs). And he’s already in the game, but I’m going back with him and the two little brothers.

Speaking of children, do you think of being a mother?

A : I started a late career and have women who fight until they are 50. I intend to fight more, according to my health and my training. Being a mother is not something I want, not even in the future. I have six nephews, I helped to take care of it, I think it already gave, right?

Are you old enough to stop?

A : I do not have a date, just as I also started with no date. As long as I’m well, I’ve got the results, I want to reap the benefits of the sport.

You will fight in the week of the patron saint of Ireland, St. Patrick, an additional motivation for KatieTaylor.

A : Like in Argentina. It was the anniversary of the city of Jujuy, the party was also for Brenda (Carabajal). The gym was crowded, 6,000 people, everyone shouting her name. And there (in the United States) will be the same.

Then you are prepared for this adverse climate.

A : The capacity of the gym there is 10,000 people. Here comes the realization of the dream of fighting in the United States, with the house full, because I saw it on TV.

How are you studying Katie Taylor?

A : I know her from the amateur. At the 2011 China World Cup, I was able to follow her fight, even though I was from a category above. She was 60 kg and I, 64 kg. What we have more trained is the strategy of the fight.

What is her strong point?

How is your english?

A : My English is neither Joel Santana’s: the book is on the table (laughs). Let’s go with someone who can talk to help people.

If you spoke English, what would you say to the gringa?

A : I think I’m going to speak with my fists, it’s my best language, because my English is terrible.

How’s life outside of boxing? What you enjoy doing?

A : I go to the movies, theater, park, quiet programs. I’ve never been a ballad.

A : I like to watch volleyball, basketball and soccer. I’m from Palmeiras.

In financial terms, what has changed in your life as a professional boxer?

A : I could not live in the sport, I had to work hard, I had a lot of classes, I trained very hard in São Paulo. I am from a humble family, my father is a mason, my mother is from home, I had to reconcile it. After I came to Santos a lot has changed because I get sponsorship from Memorial. I just started training and with what I get I can keep and help my family. The fights money I always keep.

Did you ever think about quitting boxing?

A : In September 2017 I was going to stop, because I was not able to conciliate, I was tired. I spoke with Felipe (Moledas, coach) who would make the last fight. He said that he would talk to seo Pepe (Altstut) to bring me to Santos. ‘Would you live here?’ He asked. ‘Of course!’ I said. I came in October and in December I went to Argentina (where I was world champion).

How does the family see your career?

A : My mother loves fighting, she has accompanied me from the beginning. But she does not watch my fights, only the last one that went through SporTV (defense of the world title against the Colombian Yolis Marrugo, last September, won by Volante). It motivates me, it helps me a lot.

A : You’re a bit scared, but you like it too, take a picture with boxing gloves. My two brothers too, I’ve always had their support.

How is it to live with the idols of Brazilian boxing?

A : Eder Jofre became a friend. If I were a boy, my name would be Eder. Every event that I go he is, it is the fulfillment of a dream you live with a person who always admired.

What did you do before you became a boxer?

A : When I started in boxing I was a law school and I was an intern, but I locked up in the fourth year in 2008. I could not reconcile because I could not afford to pay anymore and I lost my internship. I worked the Subway at dawn until 6 o’clock and went straight to the gym. I slept on the gym bench until 8 o’clock, trained and went home to help my mother, then went to work again. I worked in pizzeria, waitress. Then, in amateur boxing, I had the athlete bag, but it was not much money, so I started to teach boxing.

Ever had to use physical force in some situation in your personal life?

A : One time a boy pushed me on the subway in Sao Paulo and knocked over everything I had in my hand. I thought ‘why I go …’. I walked away, I am well of peace.

Did not you think about smacking him?

A : No, this (desire to hit) only awakens when I’m going to fight anyway.

You are Evangelica. Does religion help in sports?

A : I think every religion that drives you to seek God, be the God that you believe, be a better person and do good, is valid. In my case it helps you to have more control and always do good, no matter what happens.

Do you have a ritual on fight day?

A : In fighting and training I always do the same thing. I pray that God will protect me and keep me, that I will not be hurt and that no one with me will get hurt, because it is a job like any other that involves risks.

But to win the fight you have to hurt your opponent, right?

A : It can be by points, that there is nothing serious.

Have you ever seriously hurt yourself in the ring?

A : I broke my nose in a training session at the London Olympics in 2012. I worked when I returned to Brazil, took the nasal turbinates. It was good, because I did not know that I had septum deviation, today I breathe that it is a beauty.

Its category is up to 61 kg. Can you maintain weight easily?

A : I get to be two, three pounds above. I often say that for those who lost 40 pounds, what is losing four? (laughs).

Do people recognize you on the street?

A : Here in Santos enough. Sometimes I run on the beach and say, ‘I’m going to lose weight and stay like you!’ ‘Go and break this gringa!’ (Laughs).

Katie Taylor will challenge Rose Volante for the WBO World Lightweight Title in Philadelphia on the 16th of March.

Matchroom Boxing promoter Eddie Hearn confirmed the much-anticipated news on Friday evening, stating: “I’m over the moon to confirm contracts are signed for Katie Taylor to unify against WBO champ Rose Volante on our big Paddy’s Day weekend show in Philly in March.”

The unification fight will take place three months after Taylor’s last fight; a successful defence of her WBA and IBF World Lightweight straps over Eva Wahlstrom. Meanwhile, Volante’s came in September in a TKO win over Yolis Marrugo Franco.

The 36-year-old Brazilian — who holds a 14-0 record with eight knock-outs — has held the WBO crown since 2017 when she beat Brenda Karen Carabajal, having turned pro in 2014.

It will be Volante’s fourth — and most challenging — defence to date, with Taylor currently holding a 12-0 record, as well as having recently been ranked as the best pound-for-pound female boxer in the world by BoxRec.

The card featuring Katie Taylor vs Rose Volante for the WBO World Lightweight Title takes place on the 16th of March, and will air on DAZN and Sky Sports.