Burns Considering His Options After Parting With Warren 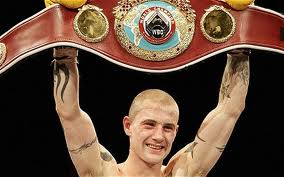 Ricky Burns’ rescheduled world title fight against Miguel Vazquez could be called off again after his camp announced he had split from promoter Frank Warren.

WBO lightweight champion Burns saw a second world title date postponed in the space of three months when Warren announced earlier this week that the Vazquez unification bout had been moved from March 16 to April 20.

But the Scot’s manager, Alex Morrison, has since declared his next fight will take place in Glasgow and that the partnership with Warren is over.

A spokeswoman for Morrison Boxing said on Thursday: “I can confirm that we have left Warren’s and Ricky is considering his options.”

A spokesman for Frank Warren Promotions declined to comment this afternoon.

Warren announced on Monday the Wembley Arena fight had been delayed and published the translation of a doctor’s note dated February 25 which stated that IBF champion Vazquez had been struck down by illness caused by food poisoning and had been diagnosed 10 days of rest.

The Coatbridge fighter’s last defence was on September 22, when he impressively stopped Kevin Mitchell in the fourth round.

Warren this week hit out at speculation surrounding the circumstances of the latest postponement.

Quoted on his website, Warren said on Monday: “For anyone to suggest in any shape or form that we didn’t have anyone under contract is wrong.”

Warren added: “I worked hard to get this fight and will keep it because it is the key to Ricky’s success.

“This fight is 100% on and I am not letting it go even though it would be easy to tear up the contract and move on. It is postponed, that is all.

“Alex Morrison and Ricky are unhappy but nothing can be done about it. They have been provided with the doctor’s note and contracts saying the fight is on.”

WBO light-heavyweight champion Nathan Cleverly is also due to fight on the April 20 show, against Robin Krasniqi. Super-middleweight George Groves earlier withdrew from the bill and signed a deal with Eddie Hearn’s Matchroom Boxing.