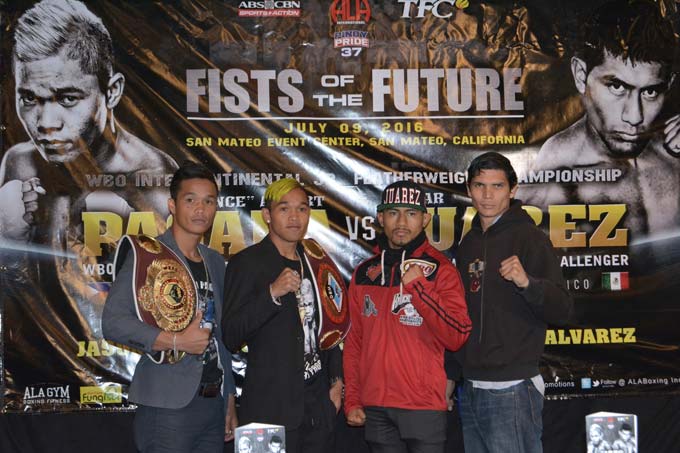 How does it feel to fight here in the United States?

I’m very excited and ready for the fight. The US is the mecca of boxing and I’m ready to give the fans a good showing.

On Juarez’ comments that Pagara isn’t at his level as a fighter.

(Smiling) Juarez says that I’m not at his level. Those results will be determined in the ring. We’ll see come this Saturday night.

What has been your reception since being here to the US and where have you been training?

The reception has been good and we’ve been training here at the “Undisputed Gym” in San Mateo, CA.

What has been some of your preparation for the upcoming fight against Juarez?

What does this fight mean to you as a Filipino and what is next for you?

What is your prediction for the fight this Saturday night?

It’s going to be a battle between us on this Saturday night, I feel that I’ll come out on top. I feel that I lost the last fight against Nonito Donaire because I was going through some personal issues and some hardships in my personal life. I want a rematch because I wasn’t healthy in the last fight. As for now, I’m very focused for this fight. I feel a lot better for this fight and I’m ready.

What do you feel about “Prince” Albert?

I consider Prince a good fighter but he doesn’t have the experience that I do.

What are your thoughts about fighting here in the United States?

It’s a great honor and I came here to win and that’s what is going to happen. In my country, this is an important and big fight that I have come Saturday night.

When asked to comment on the statement that Cesar Juarez said “Prince Albert is not at my level with experience.”

Juarez says that we are not at his level but we are ranked #2 in the world so we will see come Saturday night if we are at Juarez’s level.

How excited are you to have a boxing card like this in the US?

How do you feel about Alvarez’ fighting style being that in the majority of this fights, he either wins by knockout or loses by knockout?

Alvarez’ fighting style is definitely favoring me and come Saturday night in the ring we are expecting a knockout.

When asked how ready is Cesar Juarez for his match against “Prince” Albert.

We are more than ready, “Prince” Albert has not faced someone like Juarez before.

There are plans to already have another ALA Boxing card fight in Carson, CA on September 24th. From there the plan is to fight here in the US more often. We are also hosting more fights in other countries as well such as Dubai. We all know that the US is the mecca of boxing and that is why we’re here to showcase these fighters. Mark my words, the fight card that we’re hosting on September 24th is going to be Philippines against Mexico.