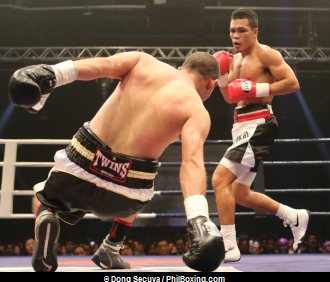 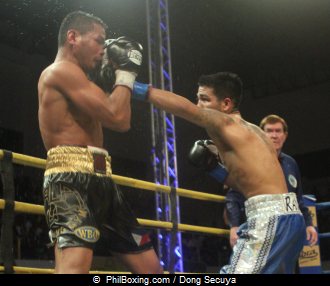 Rey “Boom Boom” Bautista lost his WBO Intercontinental featherweight title in a sometimes ugly brawl with rough and rugged Mexican challenger Jose “Negro” Ramirez before a wildly cheering crowd of fight fans at the University of Southeastern Philippines gym after which respected ALA Promotions patron Tony Aldeguer told the Manila Standard it was time for Bautista to retire.

It was a decision concurred in by his son, ALA Promotions president Michael Aldeguer and one that was relayed to Bautista who, despite a gallant effort, showed the wear and tear of an entertaining and exciting career that forced the Aldeguers hand.

From the time he was dropped in the opening round by a left-right combination to the chin and suffered a cut from an accidental head-butt, Bautista was unable to find his rhythm or to inflict any serious damage on the Mexican who surprisingly found himself at the end of a 111-114 scorecard by judge Edward Ligas which drew loud boos from the crowd when it was announced by Ted Lerner.

However, judges Danrex Tapdasan and Salven Lagumbay saved the day as well as the reputation and integrity of the Philippines when they correctly scored the fight for Ramirez by an identical 114-111 score which drew cheers from the fans in Davao who, like the rest of the country, abhor hometown decisions.

The action was fast and furious and spiced with quite a few ugly tactics by both fighters and in the din of the crowd international referee Bruce McTavish as well as the fighters didn’t hear the bell signaling the end of round two and continued to throw punches.

After a furious exchange in round three McTavish went to the corner of Bautista and asked him “Are you okay?” to which “Boom Boom’ replied “Yes, I’m okay.”

Ramirez was cautioned for using his head in round five and received a second warning from McTavish in the very next round, prompting Bautista to retaliate with some nasty tactics of his own prompting McTavish who did a tremendous job under trying circumstances to admonish Bautista telling him “Boom Boom keep it clean.”

Bautista hurt Ramirez with a solid right hand in round seven before dropping him with an excellent one-two combination in round eight.

Another head-butt by Ramirez in the tenth round forced the referee to penalize the Mexican a point for repeatedly charging forward with his head with an elbow on the side of Bautista’s head causing a cut which bled profusely before the ring physician took a look at it on the request of McTavish and ruled that Bautista could continue.

The tide had clearly turned in favor of Ramirez in the so-called championship rounds as he slammed Bautista with body shots and occasionally used a clubbing right hand to the side of the head.

Ramirez hurt Bautista in the penultimate round as the Filipino uncharacteristically resorted to holding, shoving and complaining about the tactics of Ramirez who kept boring in to the end to earn a well-deserved victory and continue the painful series of losses of Filipino champions.

The Aldeguer father and son were convinced that it was time for Bautista to hang up his gloves.

Tony Aldeguer who looks after his fighters and doesn’t take money from them said Bautista was well-set. He has two houses, four cars, a few businesses and money in the bank and it was time for him to look after his wife and newborn baby.

Aldeguer said “Boom Boom” had given fight fans lots of excitement during his career and he had nothing to be ashamed of.