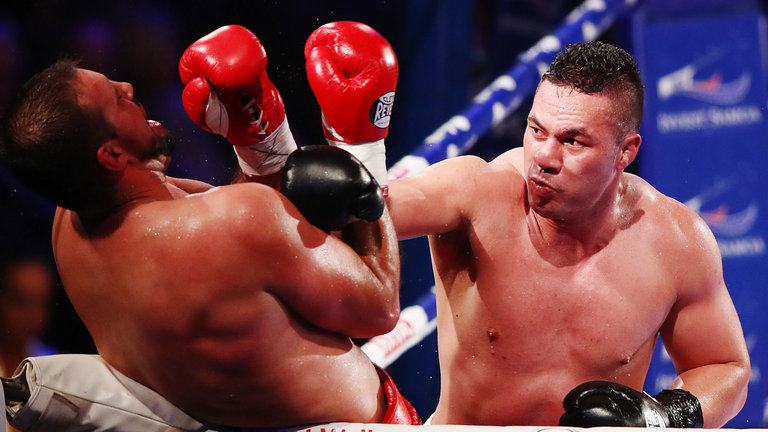 Parker failed to send out a warning to the division’s biggest names such as Anthony Joshua, producing a workmanlike display against his former sparring partner and failing to land any telling blows.

The hulking Cojanu only took the fight at short notice, following the withdrawal of Hughie Fury, and seemingly enjoyed the bout, spending the 12 rounds goading Parker and playing up to the crowd.

But, while he took Parker’s punches well, Cojanu never posed a great threat himself and Romania will have to wait for a first heavyweight champion.

The 25-year-old looked lively during the early stages while Cojanu began his showmanship, taunting Parker as the duo circled the ring.

That was one characteristic of the challenger’s display but another was the ease with which he shrugged off Parker’s blows, and he weathered a powerful combination from the champion towards the end of round one.

Parker began to look a little frustrated in round three and he was warned by the ref after pushing his glove into Cojanu’s face.

But Cojanu’s path to an upset win was made even harder when he was deducted a point in round four for reaching around Parker’s head.

The middle rounds followed a familiar pattern, with Parker doing the eye-catching work but struggling to make an impact on Cojanu, who pounded his own chest in delight when he landed a few blows of his own in round eight.

Parker had done more than enough to win but the question of whether he is worthy of a place among the world’s top heavyweights remains unanswered.

“What a fight,” said Parker afterwards. “I guess you can all see why we bring Razvan into camp with us.

“We look for the best, to prepare for the fights we have.

Parker remains undefeated after 23 fights and, having made a successful first defence of his title, says he will now begin campaigning further afield.

“I have done my best to keep my fights here in New Zealand, I guess it is now time for us to move overseas,” he added.

Parker’s trainer, Kevin Barry, said: “I told everyone, when you wrote Razvan off, that this would be a harder fight than Hughie Fury.

“We have sparred 100 rounds with this guy, we know how tough he is, and he is a very proud man, as you can see today. We knew it would be a tough fight.

“When I realised it was going to take us a while to break him down, I said to Joe, ‘Just be patient. Raz is fighting the fight of his life, don’t help him get lucky.’

“It only takes one punch to change the championship.” Joseph Parker remains unbeaten after 23 fights as a pro