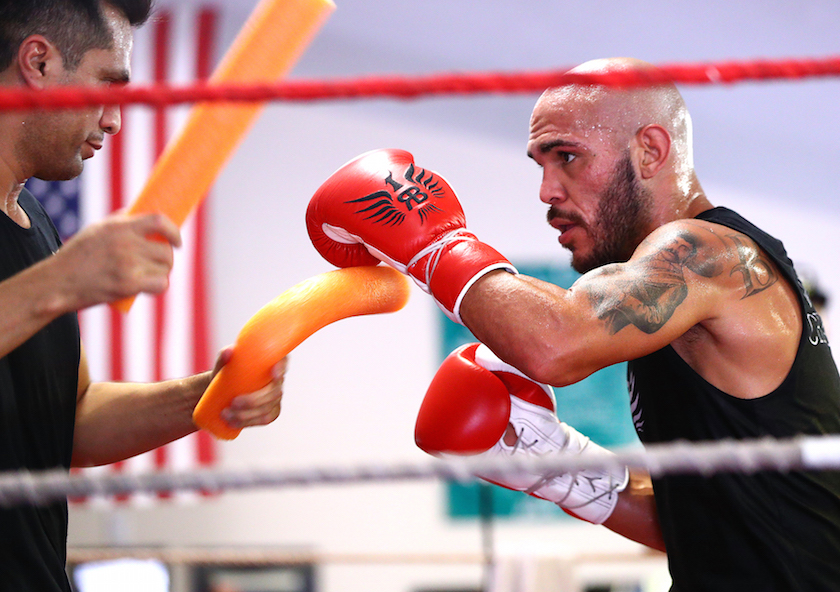 PHOENIX (Aug. 22, 2018) – Ray Beltran is returning home to defend his title and Isaac “Royal Storm” Dogboe is looking to bring some lightning and thunder to the desert.

Beltran will defend the WBO lightweight title against former 130-pound champion José Pedraza, Dogboe will make the first defense of his WBO 122-pound world title against Hidenori Otake, and Mayer will face off against Edina Kiss in a six-round special attraction.

Beltran-Pedraza, Dogboe-Otake will be televised on ESPN and ESPN Deportes on Saturday at 10:30 p.m. ET at the Gila River Arena in Glendale, Arizona. The entire undercard will stream on ESPN+ beginning at 6:30 p.m ET.

On Wednesday, many of the fighters from Saturday’s 11-fight card worked out for the media at Michael Carbajal’s 9th Street Gym. This is what they had to say.

On life as a world champion: “Things have changed a little bit, the way people talk to me and act around me. For me, I still feel like I’m a contender. I’m still the underdog.”

“I think fighting Jose Pedraza and defending my world title near my hometown of Phoenix, Arizona, is a dream come true. Defending my title against a Puerto Rican, with the rivalry between Mexico and Puerto Rico, there’s nothing better than that.”

On fighting in Arizona: “You know how I am. I try to fight and put on a good show and try to make my fans happy. It’s going to be a great fight!” On the significance of becoming a two-weight world champion: “It would mean a lot to me because not everyone gets the opportunity to become a world champion. Even fewer boxers become two-division world champions. I am going to take full advantage of this opportunity.”

On staying active in 2018 with three fights: “I like to be more active. I can see the difference. I am more focused. I see that now I’m more mature as a fighter.” On life as a world champion: “I give praise to the man upstairs, God of creation. We thank him for everything that has happened to Team Dogboe. Being a world champion is great.”

On the reception he received in his native Ghana after winning the title: “The whole nation came out to meet me at the airport. It was amazing.”

On joining the rich history of Ghanaian world champions: “I am very humbled. Boxing in Ghana isn’t as regarded as it is over here. We’ve been able to revive boxing over there. They are loving it. We are changing the perspective of the sport. It is great.”

On Hidenori Otake: “Otake is very strong, physically strong. He has a great record. You can’t underestimate Otake. We’re not underestimating him at all. He’s someone we have our eyes on, and we’re making sure, come Saturday, we are going to take him out.”

On the lack of trash talk compared to before the Jessie Magdaleno fight: “Otake is a gentleman. He’s so humble, and when two humble warriors come together, it’s mutual respect. And that’s how we’re taking it.” On Isaac Dogboe: “He is a good pressure fighter and a strong fighter. I’m going to use his pressure and his power against him.”

On the recent success of Japanese fighters: “Japanese boxers have been fighting very well recently, and I am looking to do the same. It’s great for Japanese boxing when we come to America and do very well.”