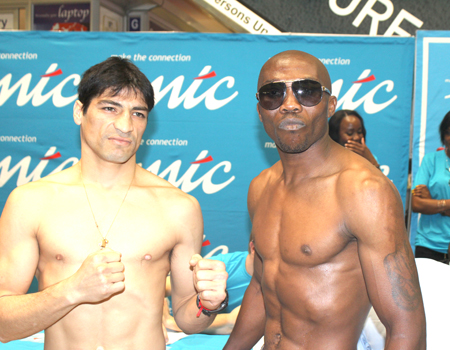 Both boxers boast impressive resumes and the fact that they are in their prime suggests the pair possess the capacity to send each other to the canvass easily with only one decent delivery should the chance avail itself. Nevertheless, Hitman is expected to retain his belt with ease and is likely to make full use of home ground advantage.

Very few boxers in the lightweight division can stand up to the former Namibian world champion when he lands punches with the same accuracy and tenacity that saw him wrestle the world tile away from Yusuke Kobori, as can be attested by 20 of his 33 victims who failed to go the full distance. Local boxing fans could not have asked for a better occasion to put behind them the lukewarm, if not disappointing, performance by Harry Simon during his controversial win over Serbian opponent Geard Ajetovic in last weekend’s confrontation that has left tongues wagging, although that may not be easy. It is very likely that that fight will make out a great topic for discussion on social occasions for many years to come.

There is no doubt that locally bred pugilists are up there with the very best in the business, and professional boxing in Namibia is certainly on the right track, as borne out by the huge financial resources committed to the sport, courtesy of generous sponsorships by companies such as MTC, Telecom and Nampower, complemented by an astronomical increase in ticket revenues. Moreover, now that the language of professional boxing on the African continent is increasingly assuming a Namibian nuance, we will increasingly be hearing the expression ‘denga komutwe’ when local boxers go through their paces in the boxing ring.

In fact, local boxing pundits believe it is extremely difficult to find any fighter willing to risk trading punches with WBO Africa Welterweight champion Betuel ‘Tyson’ Ushona, but Kaizer Mabuza, is having none of that. The veteran South African challenger will go toe-to-toe with the hard punching ‘Tyson’ in the main under-card over 12-rounds. Vikapita ‘Beast Master’ Meroro also returns to the ring to defend his WBO Cruiserweight belt against Pascal Ndomba from Tanzania, while Martin Haikali also makes a welcome return after a long layoff in a non-title 8-rounder against Nkosinathi Ntshangase in the lightweight division to conclude the lineup for one of three mouth-watering under-card bouts on the menu.