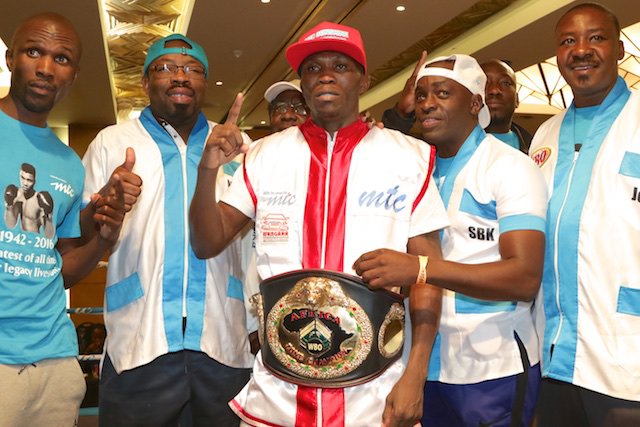 Paulus Moses got one step closer to an eventual world title fight with a strong performance in his native Namibia last Saturday night. The former WBA lightweight champion faced replacement opponent Chrispine Moliati (18-7-4, 8 KOs) in a bout served as the main event at Ramatex Factory in Windhoek as part of the traditional Independence celebrations in Namibia.

Moses (39-3-0-1, 24 KOs), who is the current WBO Africa belt holder, delivered a dominant performance against his Malawian foe before knocking him out in the seventh stanza.

“I am completely satisfied with my performance, ranked number six by the WBO now I am looking forward to another world title fight hopefully in the not too distant future. I am still one of the best in the world in the [lightweight] division, and want to fight whoever thinks they are the best,” said Moses. The WBO title is held by British Terry Flanagan, who is scheduled to make a voluntary defense against #2 ranked Petr Petrov on April 8 in Manchester.

Moses needs to be patient to get his chance to regain a portion of the lightweight crown as unbeaten #1 ranked contender Felix Verdejo and former three-time world title challenger Raymundo Beltran is also pushing to get the fight against Flanagan.

In other results of the card, undefeated middleweight prospect Walter Kautondokwa (14-0, 13 KOs) defended his version of the WBO Africa belt with an impressive tenth round knockout against Uganda’s Med Sebyala (16-10-1, 13 KOs). Kautondokwa is currently ranked #8 by the WBO and is on his way to build himself up to a world title fight.

“Sakaria is a wonder kid with great talent and I would love to see him fight a big opponent soon,” said Nestor Tobias, promoter of the event.

Tobias’s next important evening as a promoter/manager is going to be on April 15 in Glasgow, where his only current world champion, IBF/IBO titlist Julius Indongo, is scheduled to face WBA belt holder Ricky Burns in a junior-welterweight unification bout.