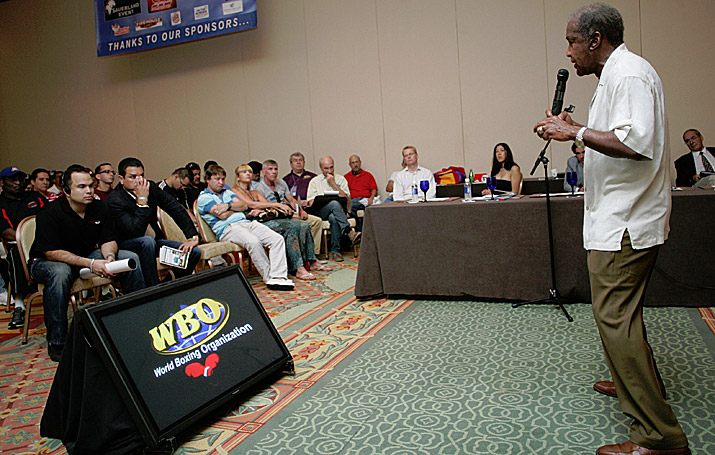 The WBO 24th Annual Convention continued on Wednesday for its second day of events, highlighted by President Francisco “Paco” Valcarcel’s report and a guest speaker who provided a training seminar for various boxing officials: Hall of Fame trainer Emanuel Steward.

The event kicked off in the morning with Mr. Jorge Molina’s report on WBO Latin America. Mr. Molina once again gave a informative and well researched presentation, which highlighted the WBO Latino’s history in developing future world Champions. Pointing out that since 1996 (when WBO Latino started), the regional organization has sanctioned over four hundred and thirty four fights, with 2011 being the biggest year ever with forty seven title fights since last year’s convention in Colombia.

Perhaps just as significant is Mr. Molina’s ability to spread out these championship fights all over two continents. Argentina has held the bulk of the fights in 2011 (with seventeen), but is quickly followed by Brazil (ten), Puerto Rico, the United States and Mexico. Most impressive for Mr. Molina, however, is the continued tradition of WBO Latino as a training ground for World Champions. Ninety-five WBO Latino champions have gone on to fight for a world title, including eleven in 2010, and thirty-two who would go on to win a world championship. For Mr. Molina, the secret to his success is in a plan that could rival Herman Cain’s “9-9-9″ in its simplicity: quality.

“The criteria for a Latino regional title is either of the two fighters is eligible to be ranked,” commented Mr. Molina, “Quality will be beyond quantity. That is why the Latino title has garnered such results.”

From there a President Valcarcel heard a discussion on the soon to be implemented changes to the WBO web page, which will soon have such additions as videos and executive blogs.

An early “happy birthday” was offered to Dr. Ramon Pina, who will be turning ninety years old in November, and Golden Boy Promotions and its representative Eric Gomez, was given a round of applace for its assistance in securing the golf course used earlier in the week (Oscar De la Hoya was a member of the club).

From there, discussions went to the recent challenges to the WBO trademark and name.

“We are perfectly protected,” commented WBO member Edoardo Ceccoli, “one by renovation and another for the transaction for being inscribe in the European registry.”

The legal discussions continued on the matter, in particular the problems with the EBU and British Boxing Board of Control.

From there President Valcarcel presented his report, and he started out by highlighting the achievements of noted Pilipino boxers.

“We have five champions, four men and one woman,” commented President Valcarcel, “We congratulate the Philippine (fighters) for the great achievements through our organization.”

From there President Valcarcel admitted that he was not yet satisfied with the amount of money going into charitable contributions and its “WBO Kids Drug Free” program.

“We are not happy with the money we are assigning for the youth,” admitted President Valcarcel, “We want at least 40-50% of money we make to go to educating youth through boxing, particularly in poorer countries. I spoke to the accountant and we will increase the donation budget this year.”

President Valcarcel also challenged WBO champions to continue to be role models for the World’s youth.

“Our WBO champs don’t only have to be good fighters, they also have to be great role models for the youth.”

President Valcarcel then invited attendees to visit the new WBO Offices tomorrow, as the WBO will have free tours provided. From there Luis Bautista Salas followed with a call for honor and dignity.

“We have to return dignity to boxing,” said Salas, “We have to be honorable in the process that we are going to move forward for the good of the sport. These principles have been upheld. I thank you all, and in particular to Francisco Valcarcel. He has brought it to the pinnacle. We are the greatest organization because we have the highest quality of people working with us.”

President Valcarcel then concluded with a quik summary of the finances of the WBO.

“The WBO is financially sound,” concluded Valcarcel, “We don’t’ owe anyone any money, we have money in the bank. The office is ours, the equipment is ours. We are financially number one, but more important we are morally number one.”

The Convention then moved into the awards ceremony, with such worldwide dignitaries such as promoters Nestor Tobias (from Namibia) and Sammy Gello-Ani (from the Philippines) receiving promoter of the year awards from their respective regions.

The convention then went to the floor for discussions on the location for the 25th Annual Convention. Three locations were nominated, Florida, Las Vegas, and Cleveland Ohio. Cleveland failed to make the final cut, and the board then voted overwhelmingly for the 2012 convention to be held in the State of Florida with Nevada being selected as an alternate location.

After lunch the convention continued with the seminars for referees, judges, and inspectors. Perhaps most noteworthy was the presence of Emanuel Steward, who gave a fascinating speech on the obligations of those officials. It was a powerful speech in which he challenged those in attendance to protect the integrity of the sport.

“Boxing is a billion dollar industry,” commented Steward, “and we can’t keep having these controversial decisions with a lot of the same people involved.”

Steward also discussed the impact one bad call could have not only on the sport but also on the fighters involved.

“Fighters are training hard,” Steward said, “but it all goes down the drain with one bad call.”

“They are already physically and mentally worn out.”

Steward, who also commented on the importance of nutrition, then made a strong argument for the implementation of an instant replay.

“It’s all about making proper decisions and the proper calls,” commented Steward, “we have time in a fight. We have all this airtime and we can’t take five minutes to review a call in a twelve round fight?!”

From there the referees held their seminar, reviewing several of the high profile fights which involved controversy on the part of the referees. Clips were played of the Mayweather-Ortiz fight, the Hopkins-Dawson fight and the Abner Mares Joseph Agbeko fight. With an open discussion of the performance of all three referees in those fights, many in attendance gained perhaps the most useful lesson from one of the referees whose performance had been widely criticized in one of the aforementioned fights: Russell Mora, who was in attendance.

“I made mistakes in that fight,” admitted Mora, “I was too close to the fighters for the last knockdown and as a result I missed it.”

It was a lesson in mechanics that proved valuable for many of the referee’s in attendance, all of them recognizing that Mora was a very good referee whose mistakes in that one fight proved to be a disaster for not only Joseph Agbeko, but also himself in 2011.