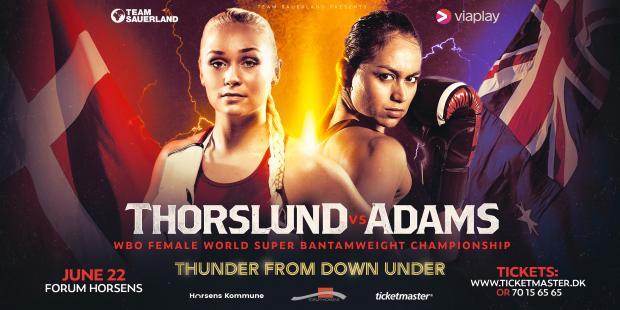 April Adams (11-1-1, 4 KOs) hopes to have her compatriot Crown Princess Mary of Denmark ringside when she challenges Dina Thorslund (13-0, 6 KOs) for the WBO World Jr. Featherweight title on June 22 at the Forum Horsens.

Adams travels to Denmark in an attempt to dethrone the reigning 122 lbs ruler Thorslund, and the Brisbane-boxer, nicknamed ‘Armageddon’, dreams of doing so in front of the Australian-born Crown Princess.

“It would be absolutely amazing if Princess Mary could attend the event. I understand she has many obligations but my team and I would feel very privileged to have her ringside,” said Adams.

“Aussies love their sport and I’ve been overwhelmed by the number of people reaching out. It’s comforting to have people and local businesses wanting to help you and want to see you succeed. I’m so thankful for the support I’m receiving so far.

“Bringing the belt home isn’t just about winning a world title. It’s about giving back to all the people that have helped me on this journey: my sponsors, supporters and especially my team. I want to put Australia back on the world boxing stage.”

Tickets for Thunder From Down Under: Dina Thorslund vs. April Adams for the WBO Female World Super Bantamweight Championship are available online via www.ticketmaster.dk or by calling (+45) 70 15 65 65.