Nietes has advantage vs. Rodriquez – Villamor 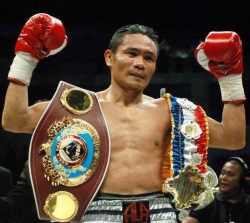 This was revealed yesterday by ALA gym’s lead trainer Edmund Villamor adding that the longest reigning Filipino champion has the edge over the Mexican when the bell rings.

But, Villamor reiterated that they won’t be that complacent against Rodriguez as he is a former champion who has an impressive record against Filipino fighters including erstwhile WBO minimumweight champion and Bacolod-hailed Merlito ‘Tiger’ Sabillo.

Murcia town Mayor Andrew Montelibano, earlier, stressed that he also believes that the champion will retain his title.

“With the kind of conditioning and training he is in, I believe Donnie (Nietes) will retain his title. I am in contact with him personally and I can see he is more ready than ever,” Montelibano said.

This boxing event is presented by ALA Promotions International in partnership with ABS-CBN Sports.(WATCHMEN DAILY JOURNAL)