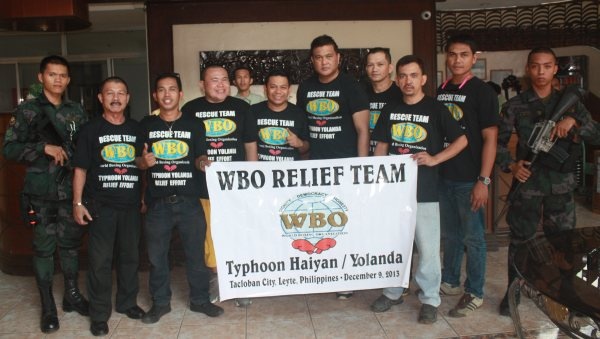 PALO, LEYTE–The World Boxing Organization (WBO), headed by its Asia Pacific Chairman Leon Panoncillo set foot here on Monday, bringing a busload of rice, water, brand-new clothing, slippers, canned goods and many other basic necessities for the victims of the recent Typhoon Haiyan/Yolanda that whipped this part of the country with a meanness never before seen in history.

Panoncillo, accompanied by his staff of topnotch boxing judges and officials, arrived in Ormoc City on Sunday, bringing with them the items bought in Cebu and a nearby mall in the city. All goods were then packed inside the the bustling Pongos Hotel, courtesy of its owner Yoyong Pongos who allowed the group to use its facilities for the repacking.

On Monday, starting 3AM, the group started to load the items on a rented bus taking them until 6AM to finally fill the vehicle with goodies enough to feed 3,000 families.

After a 3-hour trip, the group arrived in Barangay Buri here, and saw the devastation along the way. Panoncillo then decided it was the perfect place to give out the items. The first recipient of the WBO goods was a special child named Nathaniel Alao, 9 years old, who beamed with pride and joy after receiving his pack of rice, noodles, water, slippers and brand-new clothes from no less than Panoncillo himself. Barangay Captain Lito Gatela soon joined in the distribution, along with the WBO officials.

After giving away the goodies for some 3,000 families, the group immediately went back to Ormoc City to catch a trip back to Cebu, happy with the thought that the WBO has once again blazed this generous trail, and is in the forefront among boxing bodies to have lent out a hand to the typhoon victims.

“The Philippines is a major partner of the WBO. So we are here to show the people that we are ready to give back, to lend a hand, and may this also serve as an early Christmas present especially to the young boys and girls who received our humble gift packs,” said Panoncillo.

Notes: Special thanks go out to Ormoc businessman Bernie Tacoy and Thunderbird consultant Rolando Luzong for helping book a hotel room for the group which was paid for by the WBO…To the wonderful officials of Cebu namely Salven Lagumbay, Edward Ligas, Tony Pesons, Edgar Olalo, Arnie Najera, Larry Balanay, and Romar Embodo for taking time off from their very busy schedule to support the WBO relief operations, the WBO is grateful…