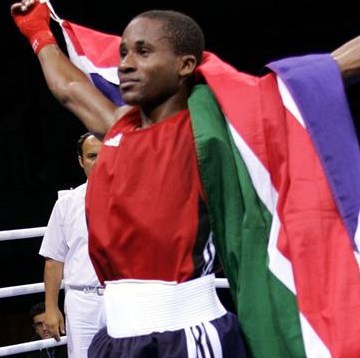 WINDHOEK – He is known as a man of few words who lets his knuckles do the talking! Namibia’s newly crowned World Boxing Organization (WBO) bantamweight world champion Paulus ‘The Rock’ Ambunda did just that in front of an enthusiastic record crowd at the Ramatex Hall in Windhoek on Saturday.

It took the stocky boxer from the Oshana Region just over 10 solid years to stake a claim to a world title since entering the dog eat dog business of boxing as an unknown raw amateur boxer in 2002 and it took the hard punching boxer just 12 rounds to finally lay his hands on the crown.

The 32-year old Ambunda rewrote the history books when he became the first Namibian boxer to win a world title on home soil after he dethroned the hard as nails Pung Luang Sor Singyu from Thailand in emphatic fashion with a unanimous decision.

Urged on by a partisan crowd, the attack minded Ambunda took the fight to the champion straight from the outset and had the skilful champion on the back foot for the better part of the 12-round bout.

He continued the momentum and never allowed the Thai boxer a chance to come out of his shell as he peppered him with a combination of well executed uppercuts and jabs, while he also demonstrated great wisdom by keeping a healthy distance from the potential danger of connecting with Singyu’s devastating left jab.

As the fight wore on, the Namibian grew in confidence and took total control of the proceedings as he deposited an avalanche of blows to the head of his opponent. Ambunda was in a mean mood and had the Thai boxer in all sorts of trouble as he kept going forward, but the champion proved a tough nut to crack as he withstood the onslaught.

Going into the decisive final round and having been left with the mammoth task of making up the vast points margin – only a knockout could save the champion’s night and the Thai boxer responded by causing the thousands of Namibians to hold their breath in the 12th round as he cornered his opponent – desperately in search of the sucker punch.

Singyu almost managed the unthinkable when he caught Ambunda on the jaw with a vicious left hook that had the Namibian temporarily dizzy eyed, but he recovered quickly and held on for dear life until the final bell – much to the relief of the appreciative home crowd.

Ambunda outclassed and out-thought his opponent in every respect during the fight and deserved to win.

The Beast dethroned the Ugandan champion to claim the Africa cruiserweight belt via a 3rd round TKO, while Moses ‘The Hitman’ Moses returned the compliment to his compatriot with a 4th round TKO against the out-of-sorts Zonke Fana from (SA) to retain his WBO lightweight international belt. Tyson Ushona beat Ghanaian challenger Emmanuel Clottey with a unanimous points decision to successfully defend his WBO Africa welterweight title.