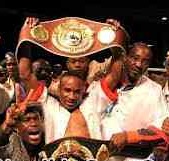 By James GoyderPaulus Ambunda won the WBO Bantamweight World Title with a unanimous decision win over Pungluang Sor Singyu in Windhoek. The Namibian was awarded the decision by all three judges with the scorecards reading 115-113, 116-112 and 116-112.

Thai fighters often start slow and this seemed to be the strategy for Pungluang who was on the back foot for the entire first half of the fight and found himself on the receiving end of some vicious right uppercuts from Ambunda who elected to try and beat the champion at his own game by applying constant pressure on him.

Pungluang was willing to stand and trade, ripping combinations of hooks to the body but it was Ambunda who was setting the pace and getting the better of some exciting exchanges. The Thai fighter came to life in round seven and scored with more body shots but whereas AJ Banal had started to fade in the latter rounds when they fought for the vacant title in Manila last year. The Namibian challenger showed no signs of fatigue and continued to press forward and look to land punches.

A strong eleventh round for Ambunda left Pungluang knowing he probably needed a knockdown to win the fight and he came agonizingly close to getting it, bombarding the hometown hero with punches in the final round which send him stumbling backwards but didn’t quite succeed in putting him down for a count.

Ambunda was hanging on for dear life but once he had bought enough time to regain his composure he was able to use his footwork to stay out of harm’s way until the final bell. Both fighters celebrated at the end of a contest which at times looked like it could be a ‘fight of the year’ contender but the European judges all ruled in favour of the Namibian who improves to 20-0 while Pungluang drops to 43-2 with this defeat.