No weight issues for Pacquiao, Horn in Brisbane 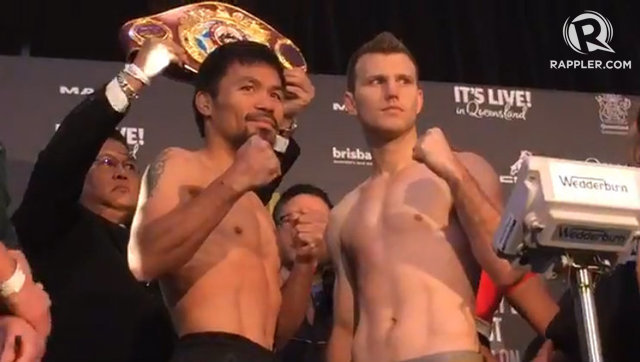 UP TO SCALE. Jeff Horn makes the 147-pound limit while Pacquiao has no trouble on the scales. Photo by Ryan Songalia/Rappler

BRISBANE, Australia – Despite reports that he woke up 7 pounds overweight the day before, Jeff Horn checked in right at the 147-pound limit for his WBO welterweight title fight against Manny Pacquiao.

Pacquiao, who could make the limit a division below, weighed in a pound under at 146.

There was far less pomp and circumstance for this weigh-in than usually accompanies Pacquiao’s trips to the scales in Las Vegas and Macau, as only media, officials, VIPs, plus select fans filled the small Paddington Room of Suncorp Stadium, where the fight event will take place tomorrow, Sunday, July 2.

Pacquiao (59-6-2, 38 knockouts) thrilled the crowd by throwing his clothes to observers. He kept a smile on his face as Horn (16-0-1, 11 KOs) stared intently across drawn-out cheeks at the face-off.

“It’s never easy to cut that many kilos, but I’m feeling a lot better now putting the fluids back in,” said Horn afterwards.

Trainer Glenn Rushton was confident that that his fighter Horn would make the weight. But just to make sure, he had him check his weight on two different scales.

“I think you can see from Jeff’s demeanor here that he’s not overawed at all. He’s relaxed,” said Rushton.

“If Manny Pacquiao is gonna beat us, he’s gonna have to do that on his merits. He’s not gonna go out there and overawe Jeff or have Jeff sort of have stars in his eyes. That’s not gonna happen.

The show, already slated to be the biggest boxing event in Australian boxing history, was already past 50,000 tickets sold, a Duco Events spokesman said.