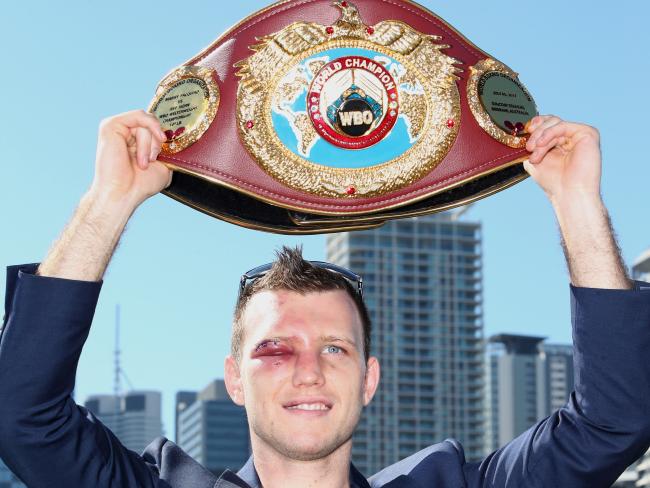 JEFF Horn walked away with the biggest scalp of his boxing career, claiming the WBO welterweight title with victory over legend Manny Pacquiao.

But Horn didn’t look like a winner as he emerged from celebrations on Monday.

The new welterweight champion looked like he’d been in every bit of a dogfight with Pacquiao at Suncorp Stadium.

Horn and Pacquiao went toe to toe for twelve brutal rounds, the intensity unlike anything we’ve seen in recent times. It was as barbaric as it was captivating, both men left battered, bloody and broken.

The Filipino legend landed 182 punches to the face of Horn in the 12 round slugfest. Jeff Horn shows the punishment sustained at the hands of Pacquiao. Credit:  Source:AAP

123 of those shots were Pacquiao’s power punches. The impact clearly showing on the face of the Queenslander post-fight.

An accidental head clash midway through the fight opened a cut over Horn’s right eye.

In round nine referee Mark Nelson warned Horn’s corner that he’d call time on their fighter if the Aussie didn’t show more.

“You’ve had enough. Show me something in this round or I’m stopping the fight,” Nelson said.

It was in the previous three minute period that Horn came drastically close to having his world title dream quashed. Pacquiao had Horn hurt with two big right hands. The Australian didn’t go down, but his legs buckled and he was literally hanging on, using the clinch to soak up some precious seconds, in an attempt to recover.

But Horn did recover. He showed tremendous heart to fight back and take the fight via unanimous decision.

Horn’s corner managed the cut superbly, they rubbed adrenaline into the wound at the end of every round. Trainer Glenn Rushton managing the wounds and continuing to fill his fighter with confidence, urging him on towards victory. It was a war in every sense of the word.

Horn looked very different from the squeaky clean fighter we saw at the pre-fight press conference and weigh-in. The Australian resembled every bit of the schoolteacher he once was, before turning professional and dedicating himself to the sport full-time.

On Sunday, he transformed into a brute, bullying Pacquiao at times, using his size and reach advantage to the fullest. Defeated champion Manny Pacquiao also walked away masked in blood. He suffered two cuts as a result of accidental head clashes with the Australian. Horn isn’t the first to show how brutal the fight game can be.

Australian UFC heavyweight Mark Hunt was soundly beaten by current UFC champion Stipe Miocic when the two clashed in Adelaide back in May 2015.

Punch stats released post-fight showed that Miocic had landed a total of 361 punches to 46.

That was a new UFC record, beating the previous record for total strikes landed of UFC legend Royce Gracie (355).

Paige VanZant is another who has worn the scars of the fight game.

The UFC beauty was taken apart by “Karate Hottie” Michelle Waterson in their fight.

VanZant showed tremendous heart against her more experienced opponent, but “12 gauge” Paige was picked off every time she rushed forward, before submitting to a brutal body lock.

Her face post-fight said the story. It was a fight she was never in.

It wasn’t the first time VanZant was left a bloody mess in the Octagon either. The UFC glamour girl was badly beaten by Rose Namajunas last December, a crushing defeat for a fighter on the rise.

Defeated champion Manny Pacquiao also walked away masked in blood. He suffered two cuts as a result of accidental head clashes with the Australian.

At least Horn fronted the cameras, Pacquiao’s post-fight press conference was abandoned. But unlike Paige VanZant and Mark Hunt, Horn walked away victorious — as the new WBO welterweight champion, meaning every drop of blood, bump and bruise was worth it. 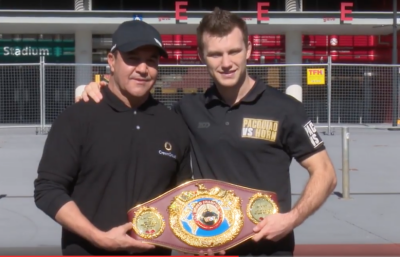 By Ray Wheatley – World of Boxing

Former three-time world champion Jeff Fenech has advised WBO #1 Jeff Horn he can defeat WBO welterweight champion Manny Pacquiao on July 2 if he uses the correct tactics at the Suncorp Stadium in Brisbane, Queensland Australia with a predicted attendance of 55,000+ fight fans. Fenech talked to Grantlee Kieza of the Courier Mail.

“Just bash the bloke in close,” Fenech said. “It’s no more Mister Nice Guy now. I’m not saying break the rules but you have to rough Manny up. Jeff, do everything to hurt him in close. Twist him, twist his knees, use your weight advantage, bully him — bang your shoulder into him. Manny can punch at a distance, Jeff. Close the distance. Stay on his chest and make him feel all of his 38 years.”

Pacquiao-Horn has already eclipsed Fenech’s record for the biggest crowd ever in Australian boxing which had stood at 38,000 for the 1992 world title fight with Azumah Nelson at Princes Park in Melbourne.