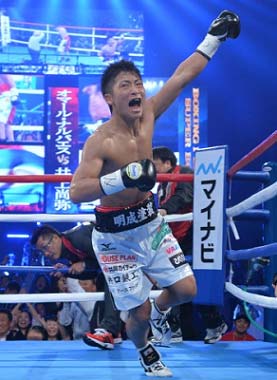 Newly crowned, unbeaten two-class world champ in only eight professional bouts, WBO junior bantam kingpin Naoya Inoue, just 21, was named Japan’s Boxer of the Year by Japan Boxing Commission and Sports Writers Club. Inoue, in the amazing 2014, seized the WBC 108-pound belt by disposing of Adrian Hernandez in his sixth bout in April and jumped up two categories to dethrone formidable WBO defending titlist Omar Narvaez in just two sessions last December. Inoue was also rendered Knockout award thanks to his three KO wins in as many games—all with the world title at stake in the previous year.

His title-winning fight with Narvaez was elected Fight of the Year due to the shockingly quick demolition by the enfant terrible. Inoue, trained by his father, took only three holidays after his triumph over Narvaez and returned to his routine gym work at Ohashi Gym as usual. The sensational champ may grow stronger and smarter.

The award-giving ceremony will take place at the Korakuen Hall from 6 PM on January 23, when great many aficionados will gather to watch the star-studded carnival. Too many isn’t necessarily a good thing, as there were such world champs as WBC 130-pound ruler Takashi Miura, WBA 115-pounder champ Kohei Kono and WBO bantam titlist Tomoki Kameda out of eight Japanese champs that failed to be given any award. Don’t worry, and get it next year.