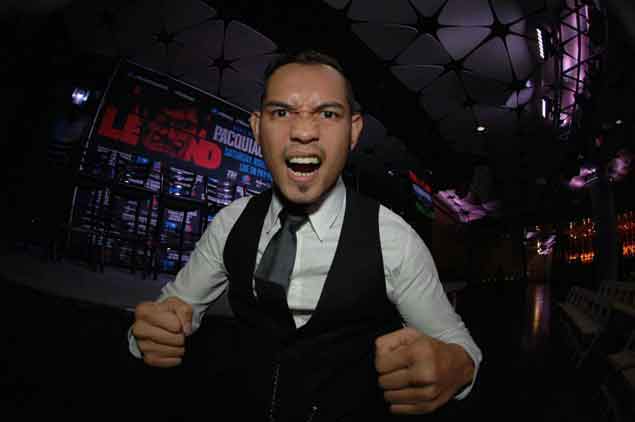 The 33-year-old Filipino showed his new-found confidence in the form of a ‘war chant’ he did with his team during the scheduled media workout at the Top Rank gym in Las Vegas on Monday (Tuesday, Manila time).

His trainer and members of team following the lead, Donaire shouted ‘I am warrior. I claim victory. I am limitless.’

He ended it by exclaiming, ‘Victorryyy. Victory, that’s who I am.”

That’s what Donaire will be five days from now despite being up against a formidable opponent in Magdaleno, who is unbeaten in 23 fights, including 17 by knockouts.

“I’m the ‘King of the Ring,” Donaire stressed before a throng of media men. “It won’t go 12 rounds vs. Magdaleno.”

The 12-round bout, which many sees could steal the thunder away from the main event featuring Manny Pacquiao and Jessie Vargas for the WBO welterweight title belt, marks the second time the ‘Fllipino Flash’ will be defending his 122-lbs crown since becoming a champion again following a 12-round unanimous decision win over Cesar Juarez last year.

He currently sports a 37-3 ring record, including 24 KOs. Donaire is currently on a four-fight winning streak since suffering a sixth-round TKO loss to Nicholas Walters to yield the World Boxing Association (WBA) super-featherweight championship two years ago.

Magdaleno, 24, however, remains unperturbed with Donaire’s vast experience and believes he can beat the reigning champ right in his first attempt at a world crown.