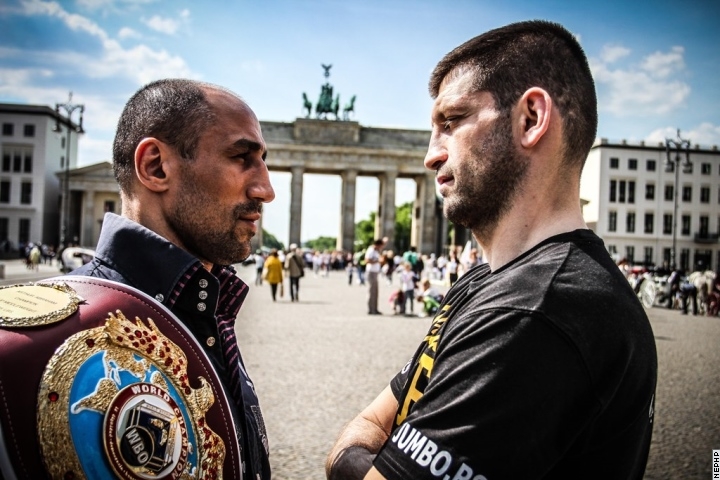 WBO super middleweight champion Arthur Abraham (39-4, 28KOs) and Nikola Sjekloca (26-1, 8KOs) went face to face at the final press conference for their upcoming showdown. The fight takes place at the Velodrom in Prenzlauer Berg, Berlin, Germany. Abraham is making his first defense after recapturing the title in March with a hard-fought win over Robert Stieglitz in their trilogy match. On May 3, Arthur Abraham plans to defend his WBO super middleweight crown against Nikola Sjekloca.

In this interview, the prodigy of coach Ulli Wegner talks about his quick return to the squared circle – having regained the title just this past March – and what he thinks about a possible fourth match up with compatriot Robert Stieglitz.

Only two months ago, you won back the WBO Super Middleweight World Championship from Robert Stieglitz. You will defend that title on May 3. Do you have something to prove?

No. I do not have to prove anything to anyone, except myself. I want to show that I am still hungry for success and also want to conserve my current shape by staying active. I can take a break when I am 40 years old – being retired for good.

Before you beat Stieglitz for the WBO Title, a lot of fans and experts said that you have had enough. Was your answer inside the ring also an answer to your critics?

I also had good tactics at hand in the rematch with Stieglitz, but his “lucky punch” rendered them void. I had the same kind of preparation for our rubber match and you saw what happened there. If I would have a lack of motivation I would have hang the gloves up rather today than tomorrow. I do not give a damn about what the critics say about it.

What about a fourth meeting with Stieglitz in the future?

We have given the fans an action-packed fight recently and I can envision that we can still give them another good fight. However, if it will come this far – I do not now. First, Stieglitz has to earn the chance to make it happen. Maybe he has to go up against someone like Tyron Zeuge, who might be too much for Stieglitz to overcome.

Next up for you is a title defense against Nikola Sjekloca. What are your thoughts on him?

He is physical strong and has only lost once to current world champion Sakio Bika. His technique is also respectable but it still will not be enough to beat me.

When you first met Sjekloca at the kick-off press conference earlier this month, he talked more about a possible unification with Bika than about fighting you. Does he lack the proper respect for you?

I do not care for his future plans. And by the way: who is the world champion – him or me? Before it gets tough inside the ring, a lot of fighters can talk a good game but cannot follow up their words with action. Watch my fight on May 3 to see this happen again.

Moreover, how do you want to earn Sjekloca’s respect?

With my punching power. When my first hard punch lands precisely, Sjekloca will know what he is up against. Then it will show what he is made of.

Your coach Ulli Wegner said that you are still progressing as a boxer. How long do you want to go on with your career?

I hope for at least another 2-3 years. I am feeling that I still have the potential to fight against the world’s best. I am still aiming to take revenge for some of my losses, like against Andre Ward. But now, it is all about beating Sjekloca on May 3.