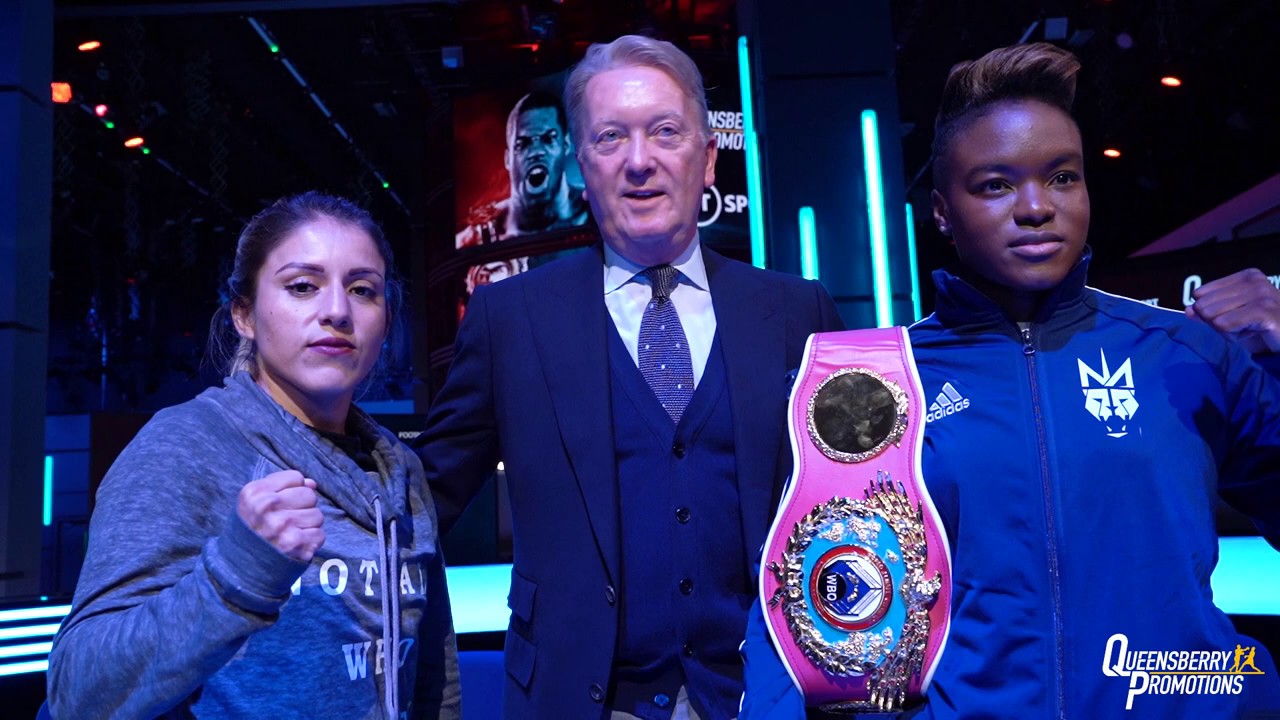 DANIEL DUBOIS and Nicola Adams will be lighting up London on Friday (September 27th) when both are in big fight action at the Royal Albert Hall, live on BT Sport.

The vacant WBO International Heavyweight Championship will be on the line when Dubois (12-0, 11KOs) faces Ghanaian Ebenezer Tetteh (19-0, 16KOs).

Here are a selection of quotes from the event:

“Daniel has had a fantastic year and gone from strength to strength. He is the best young heavyweight in the world in my opinion, and that is a burden I have put on him.

“We know he has power, but Daniel can box. He is not just a cumbersome clubber. And he is the best young heavyweight I’ve been involved in. He is a special young man.

“As my boxing mentor, the late Ernie Fossey said, ‘If you can’t jab, you can’t fight.’

“Good fighters have great jabs and Daniel has a great jab. It is a big comparison to make at this stage of his career, but Daniel has that Larry Holmes jab. I love seeing fighters who can jab.

“Nicola is our golden girl and I can’t wait for her first fight as a world champion, but this is a hard fight and I hope she comes through.

“Nicola is a legend with two Olympic gold medals. I want to see her come through this and be an active fighter.

“Archie is in title winning habits, an ambitious young man, but he has a tough challenge. It is going to be fireworks and great for the fans.”

“It is my job to come through in style. I haven’t really studied Tetteh. I just want to fight and win again.

“Every challenge brings something different and I get better each time I fight.

Dubois says he’ll be facing “big names” soon
“I believe I am world class and it is only a matter of time before I am up there with the big names.

“I am a man on a mission and not going to be stopped. It will be fireworks on Friday and a devastating performance is coming.

“The Larry Holmes compliment is great to have especially from Frank. He has been in the business a long time and knows what he’s talking about.”

“I have watched Daniel v Lartey and Gorman and know what I have to do to beat him on Friday.

“And, I gave Lartey sparring and I am better than him. I can move and punch.

“I expect to beat Daniel. Lartey gave him a good fight but I will finish Dubois.

“I want to take the title home and be the first Ghanaian Commonwealth heavyweight champion.”

“Maria will stand in front of me and they are the best to face because they’re there to get hit.

“I have a lot of goals. I want to unify the flyweight division and this is the first step in the right direction.

“It means a lot to box at the Royal Albert Hall where my hero Muhammad Ali did. It is special.”

“Declan is a very good fighter and we all know he can box. I will adapt to anyone’s style and whatever he brings I will match.

“And I believe I’m a great fighter and they adapt to any style. I have done tests and I am bigger, stronger and quicker than 12 months ago.

“The fight will be how I want to fight and I have an answer to it all.

Archie Sharp targeting WBO champ Jamel Herring
“He has been chinned and that must play on any man’s head. The WBO champion Jamel Herring has been mentioned as a future opponent, but I am not overlooking Declan.”

“I’m here to spoil the party. I am gonna come forward and put the pressure on him.

“Archie is a good boxer, rangy, switches and moves well. I’m not really worried about him because he hasn’t been tested. He beat Lyon Woodstock and Jordan McCorry who I don’t rate at all.

“No ifs or buts, I am becoming WBO European super-featherweight. I’m a crazy Irishman and here to fight.

“If he has overlooked me he is silly. I think it’s down to who has the best boxing IQ.”

Dubois vs. Tetteh ticket information
Tickets for the September 27 bill at the Royal Albert Hall are available to purchase from www.ticketmaster.co.uk and www.royalalberthall.com. Prices £40, £50, £75, £100, £150 Ringside. 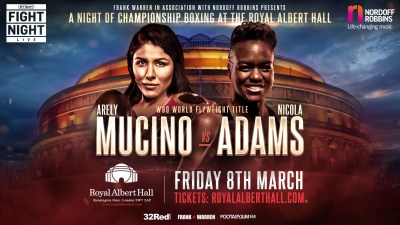 Nicola Adams has postponed her 8 March fight against Mexican Arely Mucino – the Briton’s first shot at a world title – because of injury.

The two-time Olympic champion, 36, was due to challenge for the WBO flyweight title at London’s Royal Albert Hall.

But a statement from promoter Frank Warren said Adams had “picked up an injury during her preparations”.

“The world title bout will now be rescheduled to take place later in the year,” the statement added.

A bout with Mucino would have been Adams’ sixth since turning professional in 2017 and she said in January she wanted to win her first title to emulate her “hero” Muhammad Ali, who boxed at the Royal Albert Hall in 1971 and 1979 exhibitions.

The contest was also set to take place on International Women’s Day.

Adams earned a unanimous points victory to defeat Isabel Millan of Mexico in her previous fight in October.

Mucino, 29, claimed her world title in February 2018 and has a record of 27 wins, two draws and three losses in 10 years as a professional. 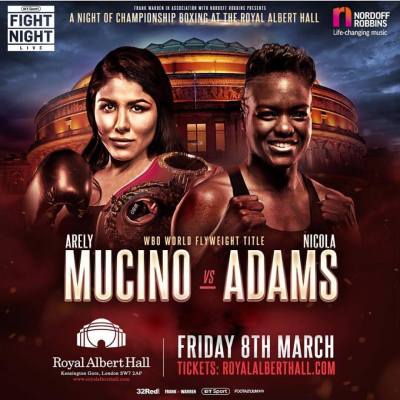 NICOLA ADAMS OBE WILL be hoping for a double celebration on March 8th. Britain’s most successful ever female boxer will bid to become a professional world champion on the same day that females across the globe unite to celebrate International Women’s Day.

The 36-year-old has long been the Leading Lady of British sport and now aims to add the WBO world flyweight title to her two Olympic gold medals and numerous other gongs.

International Women’s Day is celebrated each year and represents a focal point in the movement for women’s rights.

Adams’ own celebrations will take place within the salubrious surrounding of the Royal Albert Hall and the occasion will certainly be marked with a few trademark right handers.

The significance of the March 8 date did not escape the Lioness when she rocked up in South Kensington to set the ball rolling on the promotion of her date with destiny that comes after just five previous professional fight nights.

“I am absolutely over the moon, really excited and can’t wait to get going,” reacted Adams to the official announcement of her world title assignment against the experienced Mexican Mucino.

“I am determined, training hard – and this is the reason I turned professional. I achieved everything there was to achieve as an amateur and I now want to win a world title as a professional boxer, just like my hero Muhammad Ali.

“To think that he boxed in the same arena as I am going to be boxing in is unbelievable for me. To come away with a world belt and to call myself a world champion is every boxer’s dream.

“I just can’t wait to get in there, to perform and prove to people that I belong at world level. I am hoping all the fans will come out to support me and all the other boxers as well because it will be an exciting night of boxing.

“Even if they can’t make it out, just watch it at home live on BT Sport. It will be a fantastic night and I just can’t wait to get going.

“This is where it is going to happen and on March 8 I will be ready. I am telling you now, that belt is staying here with me.

“Winning it will be right up there with my Olympic medals and to be able to do that here in London at the Royal Albert Hall on International Women’s Day as well will mean everything to me.

Frank Warren added that he is convinced the timing is right for Adams to take the professional plunge into the elite end of the sport.

“Nicola has obviously broken lots or records along the way with being a double Olympic gold medallist,” added the promoter, who has guided her professional career from the beginning.

“She will be the first female professional to perform at the Royal Albert Hall and will be fighting against a world champion who has had roughly six times more pro fights than Nicola has had – so it is not going to be an easy fight for her, that is for sure.

“Nicola is a winner and has a winner’s mentality and I am convinced she will come away with the belt. This is history making.

“It will be a big moment for British sport to have our first female world champion to hold a bona-fide and recognised belt in the WBO title.”

Tickets are priced from £40 and are available to buy via RoyalAlbertHall.com 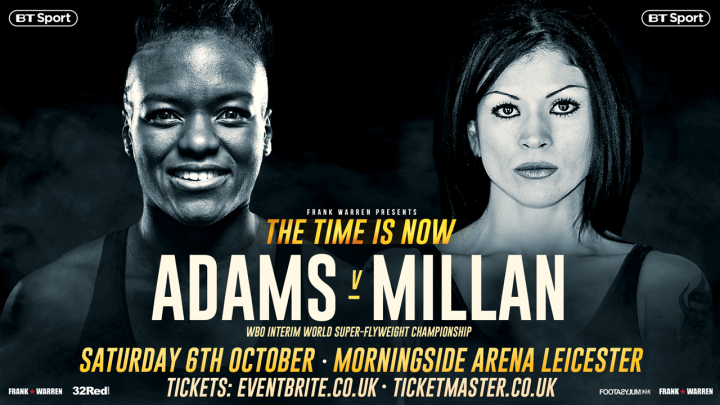 Adams (35) has recently teamed up with trainer Dominic Ingle in Sheffield and will be competing for the interim strap in just her fifth outing as a professional. Her last outing was in her native Leeds at Elland road in May where she only needed one round to defeat Argentina’s Soledad del Valle Frias.

The highly decorated amateur will have the opportunity to win her maiden title as a professional and place herself in pole position to fight for the WBO World title; currently being held by Germany’s Raja Amasheh (21-1-1).

Her Mexican opponent Millan (33) promises to be a worthy competitor for Adams having experienced challenging for world title honours in the past but falling short against five-weight world champion Naoko Fujioka in March 2017.

“Nicola has been asking for a fight like this and I’m delighted that we have delivered for her.” said her promotor, Frank Warren.

He continued: “Isabel Millan is a tough, Mexican fighter, has a good record and has good experience fighting at world level, this is going to be a good test for Nicola.

“The Leicester bill is absolutely stacked with good quality fights and Nicola fighting for the interim world title just adds to what is going to be a fantastic night of boxing on October 6th.”