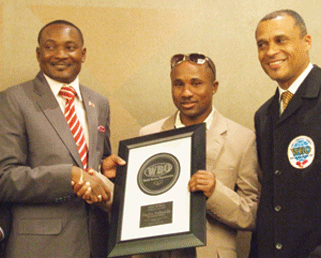 WINDHOEK – While Africa is blessed with a significant number of highly talented boxers – the continent is poorly represented in some of the high-profile global titles.

It’s a well-documented secret that a good chunk of African boxers are holed up in the less prestigious World Boxing Federation (WBF) and several other low-profile boxing umbrella bodies, but Namibian boxers have their eyes firmly fixed on the real McCoy.

Namibia’s World Boxing Organization (WBO) undisputed Africa bantamweight champion Paulus “The Rock” Ambunda, is one step away from a crack at the coveted world crown.

However, the quicksilver Namibian must first negotiate his way past the equally dangerous Bongani Mahlangu when Ambunda makes his 4th title defence against the South African in the main bout at the Windhoek Country Club on November 5.

Ambunda is unbeaten in 16 fights with 10 stoppages, while his opponent holds an impressive record of 15 wins and one defeat to his credit in 16 fights in the paid ranks.

Ambunda’s handler, Nestor “Sunshine” Tobias, is upbeat about his boxer’s prospects.
“What makes this fight very interesting is the fact that the current WBO bantamweight world champion, Nonito Deneiro, has given up his crown after he moved up a notch to the super bantamweight category,” says the world-acclaimed boxing guru.
“The title is vacant and is now there for the taking since the number one and second ranked challengers are both from Asia – victory for Ambunda, who is ranked number three in world rankings, could pave the way for a crack at the world title against one of the two Asian challengers,” adds Tobias boastfully.

Tobias also lashed out at the reluctance of corporate businesses to come on board as sponsors for major boxing events. Boxing is a very expensive exercise in terms of organization, purses, travelling, judges, referees and many other aspects attached to the high demands required in professional boxing.

“Apart from our regular sponsor Nampower, we have been gravely struggling to convince and lure potential sponsors to our shores despite the unsurpassed success of our boxers. Namibia has a very good chance of adding to the list of former world champions Harry Simon and Hitman Moses, but this dream can only be realized if all stakeholders put their shoulder to the wheel.”

The hard-punching force will defend his WBO Africa super middleweight belt against Johannes Pieterson from South Africa, while Uushona puts his belt at stake against south Ghanaian challenger Francis Gakpetor over eight rounds.

Entrance fee is N$10 000 per table of 10 for the VIP’s (finger meals included) while spectators on the grand stand are required to cough up N$100 per seat.