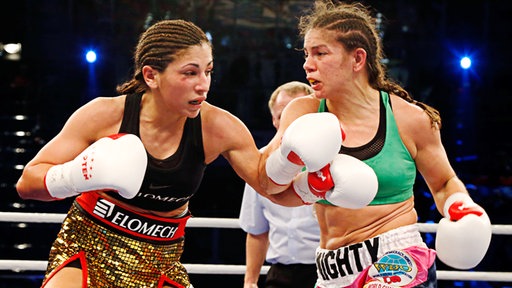 Melissa McMorrow made the second successful defense of her WBO and WIBF women’s flyweight titles with a split-decision victory over Nadia Raoui at the GETEC Arena in Magdeburg, Germany. Two judges saw it 99-91 and 96-94 for the San Francisco, Calif. resident McMorrow, while a third had it 96-94 for the native of Herne, Germany Raoui.

McMorrow (9-3, 1 KOs), who won the title by scoring THE RING’s female boxing upset of the year last year by handing Susi Kentikian her first loss in May, came out aggressively as usual, working the midsection of Raoui. Raoui (15-2-1, 3 KOs) took advantage of McMorrow’s eagerness with counter uppercuts, but was met by a flush McMorrow right cross to punctuate the first round.

McMorrow found success upstairs at well to the head, particularly in round four as her Joe Frazier-like bobbing and weaving opened up opportunities for her overhand right. Raoui, whose lone previous defeat came via a split decision to Kentikian in 2010, landed good right hand counters in round five but, without significant power, they failed to halt the momentum of the incumbent champion. McMorrow continued to press the action for the remainder of the ten-round bout.

McMorrow, who is trained and managed by three-time former world title challenger Eddie Croft, has no won three straight since her thrilling split-decision loss to Arely Mucino last February. She is one of three female flyweight titleholders located in California, joined by WBA titleholder Carina Moreno of Watsonville and IBF claimant Ava Knight of Chico.

The fight was an undercard bout supporting the Robert Stieglitz-Arthur Abraham II WBO super middleweight title fight. In addition to German television, McMorrow-Raoui was televised in the United Kingdom by BoxNation and will be shown in America by Epix on a delayed basis.