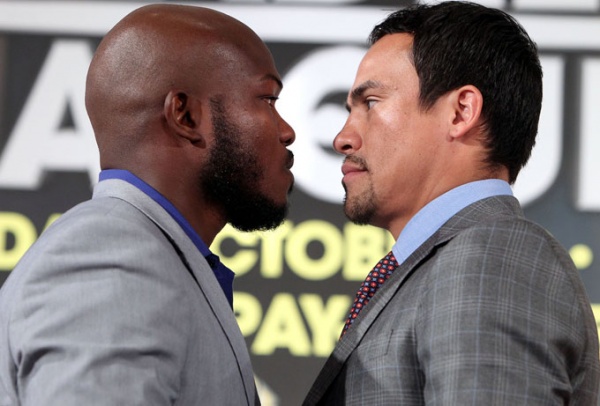 “I want to welcome you all to what I believe will be the fight of the year or certainly a candidate for fight of the year,” said Hall of Fame promoter Bob Arum. “This fight is for legacy. Timothy wants to win this fight to beat the top Mexican fighter in the world and Juan Manuel Marquez is looking to make history to win 5 world titles in five weight divisions.”

Mexican promoter Fernando Beltran of Zanfer Promotions, who co-promotes Marquez, was also on hand as he spoke on the upcoming bout, “This is the fight everyone wants to see. Two professional fighters, of course, because of their last performances. I think Timothy really fought with his heart. It is one the most sensational fights I have seen live.

“These guys are going to go at each other. They know how to get into it. This is a real fight, a boxing match. Not a guy that is going to be running around outclassing his opponent with his skill but not giving the fans what they paid for. So these two guys will give the fans their money’s worth.”

Marquez trainer Nacho Beristan talked with the media as he anticipates a tough one.

“This is a real natural interesting fight. We recognize the quality of the champion, the way his trainer handles him. I think we will have a complicated night but we have every right to say we will come out victorious,” Beristan said.

Team Bradley was represented by his manager Cameron Dunkin along with Timothy’s father Ray Bradley and trainer Joel Diaz. Diaz spoke about the upcoming preparation and challenge they have in facing Juan Manuel Marquez.

“We are back again in another tough fight. We have by far one of our toughest fights against one of the toughest opponents, an Aztec warrior which is Juan Manuel Marquez. Behind him stands the professor of boxing, the best trainer in the world Mr. Nacho Beristan,” Diaz said. “Now it’s in my hands to put together a plan to beat Juan Manuel Marquez with my fighter, the world champion Tim Bradley.”

Juan Manuel Marquez followed as he welcomed everyone in attendance talked about his upcoming showdown speaking both in English and Spanish, “I want to thank Team Bradley for this fight. Well I have always said if I want to be the best I have to beat the best. Bradley is the champion. I am ready for this fight. The people will see October 12 another great fight because of our styles. I feel focused for October 12. I am training real hard on my strength and speed. That is what is really important for this fight, the speed.”

“This belt is beautiful. Everyone knows what happened in November 2011. This belt should be mine, but October 12 I will be back for it. This is my motivation. I feel happy for this opportunity,” Marquez concluded.

Timothy Bradley made his statement, speaking highly of his counterpart, and promises to give another great performance.

“I am so pumped up can’t wait to get back to the gym and start training for this fight. I know what I have in front of me, the obstacle I have. It’s going to be a tough challenge. I am not taking him for granted. I don’t care how old he is what he has done in the past, he is facing me now. After October 12 I will be on everyone’s pound for pound list without a doubt. Don’t miss this fight I am telling you it’s going to be an unbelievable night,” Bradley stated.

The press conference concluded as both faced off for the cameras and things got a little tensed as Bradley stepped up to Marquez but that situation was quickly defused.

“You got two top athletes. Marquez in his eyes is very determined and hungry like he wants something it looks like he wanted to take something from me there and I looked the same at him I mean we are both warriors. Call us roosters or gallos (Spanish),” Bradley told Fightnews.com.