Hooker Back in the Ring Saturday 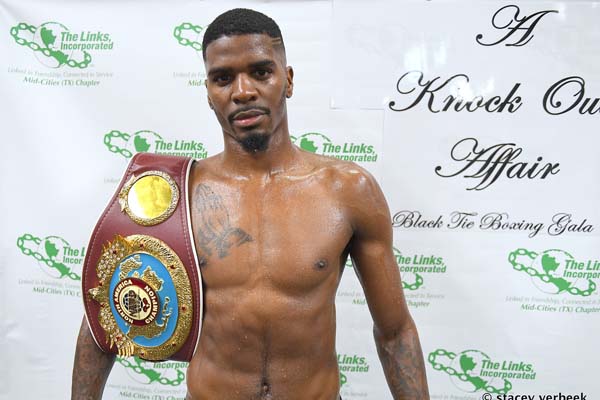 While Terrance Crawford is 650 miles north in Lincoln, Nebraska fighting for all the other super lightweight belts, Maurice ‘Mighty Mo’ Hooker will be battling Courtney ‘CJ’ Jackson for the NABO Super-Lightweight [Jr. Welterweight] title on Saturday at the Omni Hotel in Dallas, Texas.

Crawford will be watched by millions on ESPN taking on Julius Indongo and raising lots of money for himself. Hooker [22-0-3, 16 KO] will make somewhat less and headline a non-televised black-tie fundraiser for a DFW-area chapter of The Links, Incorporated.

Crawford is the top of the rail but ‘Mighty Mo’ is not 650 miles behind the world’s top 140-pounder. Until they meet, if ever, in the ring Mighty Mo is taking on an undefeated, untested fighter who was carefully picked for Hooker’s handlers, Arnie Verbeek and trainer Vincent Parra.

“There was a short list,” Verbeek said. “Roc Nation thought this was the best fight, they presented it to us and we could’ve vetoed whatever we’d like.”

A quick troll through Jackson’s perfect 17-0-0, 10 KO professional record exposes a textbook list of human tin cans. A [not-so random] tally of seven Jackson opponents shows a combined record of 1-98-0 and only three of the 10 others owning winning records.

Nice! Sounds easy. So when will ‘Mighty Mo’ match up with Crawford at 140 pounds?

“We’re ranked No. 2 WBO so at some point they are going to have to put us in there,” Verbeek said, while emphasizing he is not focused on rankings nor titles, right now.

This will be Hooker’s fifth fight under the Roc Nation banner, an organization that undoubtedly would like to see him win some world titles.

Promoters have served Jackson well by arranging this title bout but he can’t have any delusions about walking out of the ring with that perfect record, or an NABO belt. The 29-year-old Homestead, Fla. resident is catching a tough, talented champion on the upswing of his career, a fighter with faster hands, supreme boxing skills and one has been pushed to the brink of defeat without submission. Рабочее зеркало прямо сейчас https://5stihija.ru Hooker is no tin can.

“He’s about to peak,” Parra said about Hooker’s career curve. “He just turned 28 so the next couple years are crucial – we’re preparing Mo to be the best Mo he can be.”

Style-wise this is not a good matchup of Jackson’s short hands against Hooker’s long arms. Jackson doesn’t look slow, he just doesn’t get his arms away from his body like he will need to against a taller, faster fighter. It’s hard to imagine Jackson hitting Hooker with anything that matters. If Mo keeps him away from the body it should be a quick main event.

“He’s tough, he’s inspired, he’s got a little bit of history behind him and built himself a nice little record,” Parra said about Jackson. “He’s about to find out there’s levels to this; Maurice is gonna handle business.”

Putting aside respect for the other camp, this is a classic tune-up for one of North America’s best true junior welterweights. A can’t-lose matchup in front of a hometown audience, dressed wonderfully for the occasion while raising money and awareness for a 36-year-old organization that helps lower-income families in the Mid-Cities region of the greater Dallas-Fort Worth area.

Hooker trained in Dallas for this weekend’s fight but usually spends much of his camp-time in San Diego and in the San Bernardino Mountains, training where other boxers go to suck in the thin air above Southern California’s air pollution at 6,750 feet elevation.

“I love Big Bear training camp, there’s nothing to do but train,” Hooker said.

Hooker has no problem weighing in under the super lightweight limit of 140 pounds. His slim build hides a powerful right hand. Hooker feels his best assets in the ring are his jab and his power. He sparred this camp with welterweight Greg Jackson, of Philadelphia, Johnny Garcia from Michigan and DFW lightweight Manuel Rey Rojas, among others.

Hooker is a family man who he thinks he has two or three more fights at 140 pounds “And go from there, he said. “I want to retire around 154 with a couple title belts.”