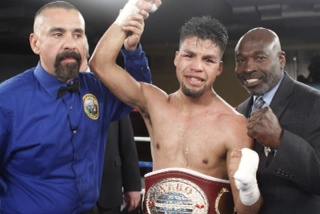 CABAZON, Calif. (Feb. 23, 2013) – For the 102nd and 103rd times in its 10½-year history, a previously unbeaten fighter suffered the first loss of his career on ShoBox: The New Generation live on SHOWTIME®.

The latest was Art “Lionheart” Hovhannisyan, of Glendale, Calif., who dropped a close, unanimous 10-round decision to Alejandro “El Alacran” Perez, of Salinas, Calif., in an action-packed main event Friday night at Morongo Casino Resort.

Earlier, Tureano “Reno” Johnson (14-0, 10 KOs), of the Bahamas, dealt Detroit’s Willie Fortune (15-1, 7 KOs) his initial setback on a lopsided eight-round decision. Johnson won the opening bout of the telecast by 80-72 on the three judges’ scorecards.

The victory in a scrap for the vacant NABO junior lightweight championship was Perez’ first in three starts on ShoBox.

“Over the years on ShoBox, the series has been very liberal about bringing back fighters coming off losses or, in this case, two losses,’’ said ShoBox expert analyst and boxing historian Steve Farhood. “So our belief in Perez as a viable opponent was justified.’’

Perez and Hovhannisyan are quite familiar with each other, having sparred as many as 80 rounds in the past. They are pals. But they didn’t perform like it, treating the fans to an entertaining, fast-paced, hard-fought fight that featured numerous heated exchanges.

“What made the main event so entertaining was that these two friends didn’t fight like friends,’’ Farhood said. “What was surprising was that both were most effective when they were boxing and picking their spots, which is an uncharacteristic style for both of them. The difference turned out to be Perez’  body work and a slightly superior work rate.’’

Farhood and ShoBox blow-by-blow announcer Barry Tompkins had Perez up by one point at the finish, while the third man at ringside, expert analyst and former world champion, Raul Marquez, had Perez winning by three.

The crowd-pleasing Perez lost his previous ShoBox fights to then-highly regarded prospects Diego Magdaleno and Rico Ramos. Magdaleno is still perfect as a pro; Ramos went on to become a world champion.

“It’s a great relief to finally win one on ShoBox, but I definitely felt I had it,’’ said Perez, who was triumphant despite getting docked a point for a low blow in the fifth.  “All the hard work paid off for me. Although this was my first fight in a year, I never stopped training and never quit going to the gym.

“I think I surprised Art with my straight right hands down the middle. I don’t think he expected that. It was something we worked on specifically for this fight. I train hard to please the fans and give them a great show, and I think we gave them a great fight tonight.’’

A bitterly disappointed Hovhannisyan didn’t seem as upset with the decision as he was with himself. “It was a close fight,’’ he said. “I didn’t throw enough punches.’’

That wasn’t the case with Johnson, who landed countless shots with both hands against Fortune, but couldn’t drop him.

“Johnson was obviously the stronger, busier fighter,’’ Farhood said. “While his technique was often lacking, he still dominated.’’

Johnson may have been victorious by a landslide, but it wasn’t the kind of performance he wanted or expected from himself. “This was really a frustrating fight for me because I realy wanted to win it by knockout,’’ he said. “I am mad at myself for making so many amateur mistakes.

“Fortune is a tough, tough guy and I hit him with all kinds of solid shots that most fighters would go down from. But when he didn’t, I didn’t alter my attack. I didn’t show patience. I didn’t listen to my corner, who wanted me to move more and fight a more technical fight. At the end of the day, this was a good learning experience for me. I know, though, that I can fight much better.’’

Willie’s fortune never turned for the better, although he says he thought he’d won at least two or three rounds. “I just had no springs in my legs,’’ he said. “Maybe I was still on Detroit time, I don’t know. Overall, I just didn’t have it. But I think we put on a good show, so at least I can be happy about that.’’

Fortune’s cousin, Cornelius “K9” Bundrage, will look to get the family back on the winning track when he defends his IBF junior middleweight world title against Ishe Smith in the main event today/Saturday, Feb. 23, live on SHOWTIME at 9 p.m. ET/PT (delayed on the West Coast) from Masonic Temple Theatre in Detroit.

The executive producer of ShoBox is Gordon Hall with Richard Gaughan producing and Rick Phillips directing.