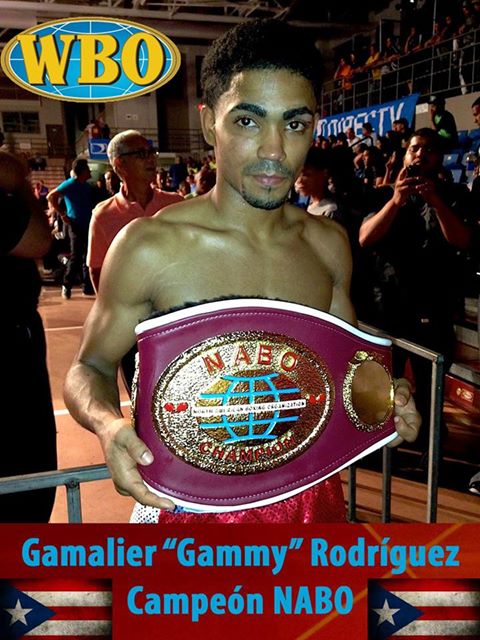 The only televised boxing event scheduled for this Saturday will be a classic Puerto Rico vs. Mexico showdown when Gamalier Rodriguez defends his NABO featherweight championship against Jorge Pazos in the scheduled 10-round main event Saturday evening in the Events Center of the Sands Casino Resort in Bethlehem, Pennsylvania. The Rodriguez-Pazos contest will be seen on Solo Boxeo Tecate, aired on UniMas. Rodriguez, of Bayamon, Puerto Rico, will be making the first defense of the title he won May 18 when he knocked out Alicio Castaneda, of Galveston, TX, in three rounds in Trujillo Alto, Puerto Rico.

Also on the card is hot prospect and Puerto Rican Olympian Felix Verdejo (6-0, 5 KOs), who seeks to maintain his undefeated record in a six-round super featherweight bout against Guillermo Delgadillo (4-4-1, 0 KOs). Wilfredo Gomez, one of the greatest of all Puerto Rican boxers, will be ringside Saturday evening cheering for fellow-countrymen Rodriguez and Verdejo. The Puerto Rico vs. Mexico rivalry extends to the 10-round welterweight semifinal where Ronald Cruz, of Bethlehem tries to get back on the winning track against Rodolfo Armenta, of Los Mochis, Sinaloa, Mexico.

Cruz, 26, has dropped back-to-back 10-round decisions to Antwone Smith, of Miami, FL, and Ray Narh, of Brooklyn, NY, after winning his first 17 fights as a pro with 12 knockouts. He hopes to end his drought against Armenta, 28, of Los Mochis, Sinaloa, Mexico, who has made a career out of fighting top opposition, including seven men who were undefeated when he fought them.

Now living in Rio Rico, AZ, Armenta has compiled a 12-10-1 record with nine knockouts since turning pro in 2007.

“The Sands Casino Resort Bethlehem has been showcasing world-class talent since the Events Center opened last year,” said J Russell Peltz, who is co-promoting the Aug. 10 card with Top Rank and BAM Boxing. “Already we have had heavyweights Tomasz Adamek, Steve Cunningham and Bryant Jennings, light-heavyweight Sergey Kovalev and junior middleweight Gabriel Rosado. Now we are adding Rodriguez, Félix “El Diamante” Verdejo and unbeaten super middleweight prospect Jesse Hart. The fights have been competitive and have been seen on NBC Sports Network and NBC-TV. We are moving forward with Solo Boxeo Tecate on UniMas. Bethlehem is a hotbed for Hispanic fight fans and August 10 should be another exciting night of boxing.”