DENVER — Denver’s only reigning world champion, “Mile High” MIKE ALVARADO, and his promoter Top Rank®, will donate one dollar ($1.00) from every ticket sold to his homecoming world title defense to The Salvation Army for its emergency disaster services serving Colorado.  Alvarado defends his World Boxing Organization (WBO) junior welterweight crown against No. 1 contender Ruslan “The Siberian Rocky” Provodinkov, of Russia, Saturday, October 19, at the 1stBank Center in Broomfield, Colo.  The fight will be televised live nationally on HBO®.

“Colorado boxing fans have been so supportive of me throughout my entire career and I am only too happy to support the people of my state in their time of need.  We all need to do our part.,” said Alvarado, who was also a former two-time high school state wrestling champion.

“I have a home in Colorado.  I love this state.  Top Rank was onboard the minute Mike brought it up to us.  A great event to support a great cause,” said Todd duBoef, president of Top Rank.

“We are so grateful,” said Salvation Army leader Lt. Colonel Dan Starrett on this partnership with Alvarado and Top Rank.  “This support allows The Salvation Army to be there for Colorado, providing for the needs of those impacted, until the healing is complete.”

Alvarado (34-1, 23 KOs) and Provodnikov (22-2, 15 KOs) enter this world title tilt fresh from Fight of the Year performances that took place in March, just two weeks apart from each other, and were televised live on HBO.  They boast a combined record of 56-3 (38 KOs) — a winning percentage of 95% and a victory by knockout ratio of 68%.

Promoted by Top Rank® and Banner Promotions, in association with Tecate, remaining tickets to the Alvarado vs. Provodnikov world title fight event, priced at $200, $100, $50 and $25, plus applicable fees and taxes, can be purchased online at TicketHorse.com, order by phone at 866-461-6556 and at Tickethorse kiosks located at all Colorado Dick’s Sporting Goods Stores (for credit card purchases only) 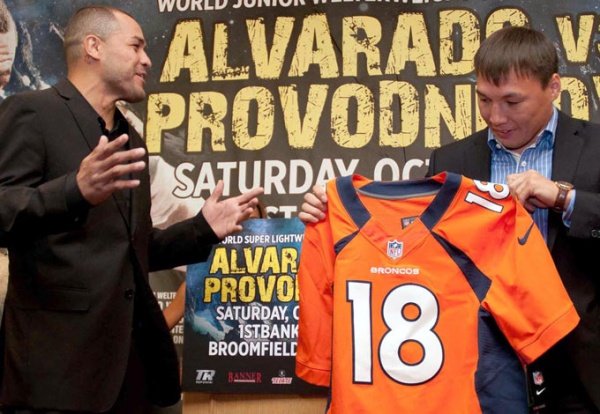 ‘Mile High’ Mike Alvarado welcomed Ruslan Provodnikov to Denver properly with a gift, an authentic Peyton Manning jersey. Provodnikov was thankful but was quick to add “You don’t know but the only number I like is #1″ in reference to the #18 on the Manning Jersey.

Fred Sternburg opened the press conference by thanking everyone for coming and thanking everyone involved. He then turned the floor over to Top Rank president Todd duBoef. DuBoef again thanked everyone before making a joke about Sternburg’s flight. Usually Sternburg has to travel to the press conferences but this one was right here in his hometown. He also joked about the fight negotiation saying that he and Alvarado were arm wrestling at one point. “I don’t know where it came from but he was challenging me and he obviously got more money out of me.”

DuBoef then spoke about the satisfaction of taking a fighter like Alvarado from his pro debut through his whole career and then having him defend his world title in his hometown, calling it ‘magical’, mentioning Miguel Cotto, Johnny Tapia and Danny Romero.

DuBoef went on to introduce ‘the birthday boy’ Peter Nelson, (who turned 32 today) director of programming at HBO Sports. Nelson praised both fighters for their previous performances including fight of the year candidates. “One thing that each of these fighters demonstrably shows each time they go out in the ring is that they are there to show more heart and guts and brawn than most other fighters in the sport ever do. So it’s a great privilege to find one fighter in the sport like this and it’s dumb luck to find two and we couldn’t be more ecstatic that we could actually put a fight like this together. For us it’s an honor to be able to get a fight like this together because we know it’s going to deliver for the fans. It also, for us, had an HBO attachment to it because we are going to be premiering that night as well, a ‘Legendary Nights’ documentary on the Arturo Gatti-Micky Ward trilogy. And while there will never be another Gatti-Ward we felt in large part that pairing that documentary and that programming with this fight is significant. Because we feel that while you’re never going to duplicate a fight like that we felt this fight captures the spirit, honors the spirit in which those two great warriors engaged each other in battle. So for us this was a homerun.”

Artie Pellulo from Banner Promotions added, “Since the moment the fight was mentioned on the internet, everybody knows what these guys are about. This (Alvarado) is a great young fighter and so is he (Provodnikov). They have no quit. They have no back up. It’s the most fan friendly fight in a long long time. And the loser will not lose. It’s a great opportunity for both of them. They are right now at the top of what they do. I met Ruslan in Russia and he said ‘Artie, I want to come to America and win world titles and I want to be a star. Because I need to have something for my family. I want to be what I am. I am a fighter’”.

Ruslan Provodnikov next took the podium and spoke through his manager and translator, Vadim Kornilov. “It’s not very often a boxer gets a second chance like this. I feel like lately I’ve been having a lot of luck in what I do. I feel like I am getting more and more on my feet. Whether that’s going to continue or it’s going to end, it’s all going to depend on this fight for me. I can confidently say that we’re both going to create a war and I’m pretty sure one of is probably going to remain laying in the ring after the fight. I will pray for both I and Mike, to make sure that we both have a great training camp and we’re both in the ring on October 19th feeling great and 100% ready. I wish him a lot of luck and I hope to see everyone on October 19th.”

Mike Alvarado’s longtime manager Henry Delgado gave praise to Top Rank for the handling and guiding of Alvarado’s career and gave them credit for much of his success. He also thanked Peter Nelson and HBO for “stepping up and taking Mike on as one of their fighters. ” He then spoke about the fight saying “I want to thank Ruslan for taking the fight. They both only know one way and that’s forward. And when you have two objects coming forward, I mean it’s going to be a crash and I’m going to see that on October the 19th. It feels good to be back home, where it all started.”

Alvarado was introduced to a huge round of applause. He started by saying, “I want to thank God for making this blessing come true. ” He then thanked Top Rank and HBO. “It’s gonna be a great show. It’s a dream come true. Having this fight in my hometown with a warrior like Provodnikov, it’s gonna be a huge blessing for me. Being able to entertain my city and bring it home to all the people who helped support me and are behind me 100%. I want to thank Provodnikov for taking this fight in my hometown. That’s a big thing for somebody to want to come into somebody else’s backyard against a warrior like myself and challenge for a world title. ”

Alvarado then gave Provodnikov the gift of a Denver Broncos Peyton Manning jersery. “I don’t know if you have an NFL team that you like but you can be a Bronco fan.” To which Provodnikov quipped, “You don’t know but he would like you to know his favorite number is number 1.” This drew cheers and laughs from the fans and media on hand.

Tickets go on sale Friday being priced $200, $150 and $25. The fight will be held at the First Bank Center in Broomfield, Colorado on October 19th.