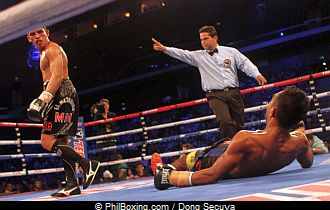 MACAU – The Filipino expats celebrated early with the sensational wins scored by the Filipino boxers on the undercard of ‘FISTS OF GOLD’ in Macau’s Cotai Arena. Milan ‘El Metodico’ Melindo of the ALA Gym surprised Tommy Seran with double left hooks and sent the Indonesian down in the first round. Seran got up and in the second, after a series of exchanges, a counter right sent Seran down again.

Seran looked hurt but managed to survive the round. In the third, Seran tried to fight back but Milan effectively mixed his offense to the body and head.

In the 4th, Melindo’s left hook landed smack on Seran’s jaw and the Indon landed falt on his back. He got up but staggered like a drunk prompting the referee to call a halt to the bout at 2:38.