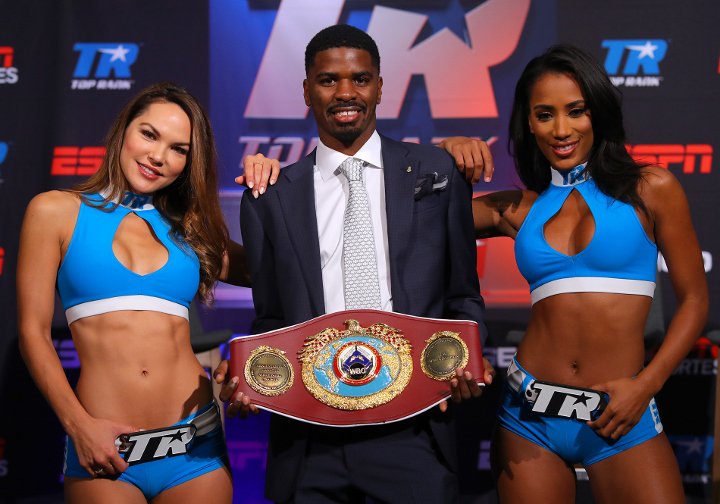 Long before the opening bell, the unbeaten super lightweight titlist already has his next challenger lined up.

The bout will serve as the chief support to a March 9 DAZN-streamed card, topped by the platform debut of Dmitry Bivol who defends his light heavyweight title versus Joe Smith Jr. at a location to be determined.

“Mikkel LesPierre is a slick, talented boxer with a tremendous work ethic,” DiBella told BoxingScene.com of his client, a 33-year old southpaw who cut his boxing teeth on the Broadway Boxing series.

Hooker will still be in attendance on Friday, checking out former three-division titlist Jorge Linares in a crossroads bout with Pablo Cano as well as former 140-pound beltholder Chris Algieri in a 10-round clash with stablemate Danny Gonzalez.

The winner of both bouts were floated as potential future opponents for the reigning champ, but will now have to wait their turn as Hooker opted for a quick ring return.

The defense will mark his first piece of ring action in the new year following a breakout 2018 ring. Hooker scored road wins over Terry Flanagan in England to win the title and a scintillating 7th round knockout of Alex Saucedo last November in Oklahoma City.

All told, the title challenge is a tall order for the relatively unknown LesPierre, who for most of his adult life has been forced to split his time between his full-time job at Mt. Sinai Hospital in New York City and honing his craft in the boxing gym.

He’s made the most of his time in the ring, only fighting twice in 2018 but in upgraded competition from where he was when the year began. A 10-round win over previously unbeaten Noel Murphy last February boosted LesPierre’s confidence, raising his game in his next—and most recent—fight, stopping Gustavo Vittori in seven rounds last June in the Astoria section of Queens, New York.

The latter win came on the same show that produced arguably 2018’s biggest upset. Former lightweight titlist Dejan Zlaticanin was a 45-1 betting favorite heading into his bout with Mexico’s Roberto Ramirez, against whom he was crushed in two rounds.

LesPierre left nothing to chance in his own appearance on the show, although it was hardly known at the time that it would lead to his first career title fight.

“He earned his world ranking while working full time, for the last ten years, as a data specialist at Mt Sinai Hospital at Manhattan,” DiBella notes. “A Brooklyn resident, he will join many Broadway Boxing veterans in realizing his dream of fighting for a world title.

“As a fighter and a person, he has earned this chance. I expect him to make the most of it.”