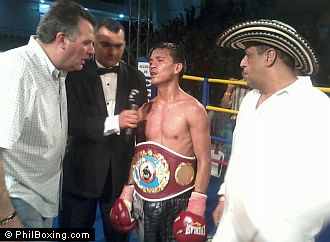 CEBU CITY – In an event dubbed as ‘Haciendo Historia’ (‘Making History’) and in front of a noisy hometown crowd of about 8,000 at the full-packed Coliseo Mario de León in Cerete, a municipality in Cordoba, northern Colombia, visiting Filipino pugilist Merlito Sabillo, fighting out of the country for the first time, made history by stopping local fighter Luis de la Rosa in the 8th round Saturday night (Sunday in Manila) and captured the vacant WBO Minimumweight Interim Title.
“I want to thank God, my family and my stable mates at the ALA Gym for this victory,” Sabillo told Philboxing by phone from his hotel room in Cerete. “I’m happy that I won this title for the country.”

According to reports from Sabillo’s corner, the Bacolod native got an early advantage in the fight when he inflicted a cut to the left eye of De La Rosa with a hook in the first round which veteran cutman Miguel Diaz failed to completely stop throughout the fight. But instead of recoiling, De La Rosa fought like a wounded tiger by throwing big bombs at Sabillo who, not the one to back out, returned in kind, igniting fireworks inside the Coliseo for a highly thrilling see-saw battle.

The dramatic end came in the eight round when Sabillo tagged De La Rosa with a right hook that sent the Columbian crushing to the canvas. Although De La Rosa was able to beat the count, he appeared to not have fully recovered. Sabillo immediately pounced on De La Rosa who went down again with a left straight. The referee did not finish the count after seeing the gallant Columbian unfit to continue.

“We got the momentum when we were able to force De La Rosa to move backwards,” Sabillo’s trainer Edito Villamor told Philboxing. “It was a great fight and the crowd gave us a standing ovation when it was finished.”

Asked whether Sabillo will fight Fuentes next for the title, Michael Aldeguer, ALA Promotions president said “it is highly unlikely.”

“The WBO seldom schedules an interim title fight,” Aldeguer explained. “To my understanding, this fight [Sabillo vs De La Rosa] was in anticipation that Fuentes will vacate his title. It is only called an Interim title fight because it was set too close to the Nietes-Fuentes fight. Also, I don’t think Fuentes can still make weight at minimumweight. Even at 108 [light flyweight] he’s having a hard time making that weight.” Fuentes, who stands at 5’7”, is unnaturally big for his weight class.

“That’s why their camp is only talking about doing a rematch with Nietes, and not fighting back at 105,” Aldeguer continued.

Asked whether ALA is willing to do the rematch, Aldeguer said, “Yes, Nietes told us he wants a rematch. We’re open to a rematch, but it should be for the right reasons.” To recall, the Fuentes camp, headed by Mexican legend Marco Antonio Barrera and his brother Jorge, blamed the Filipino judge Danrex Tapdasan and said they want a rematch and are willing to come back to the Philippines for the rematch but there shouldn’t be any Filipino judge.

“Nietes defended his title in Mexico three times, and each time, there was a Mexican judge. We never complained. It’s really up to the WBO to appoint judges. I trust in the integrity of the WBO,” Aldeguer said.

If the rematch does push thru, it may have to wait a few months because Nietes is still waiting for his cuts to heal. Nietes was cut on both eyes courtesy from his last fight with Fuentes. A cut in Nietes’s left eyebrow required several stitches and he was advised by his doctor to avoid sparring for at least two months. Realistically Nietes may be ready to fight again in 4 to 5 months.

Meahwhile, Sabillo may yet be declared the legitimate WBO minimumweight champion if and when Fuentes finally decides to give up the 105 title belt.

Sabillo and trainers Edito Villamor and Michael Domingo, who all said they were treated very well by the Columbians, will leave Columbia tomorrow after having breakfast with Cerete mayor Francisco Padilla at the mayor’s residence. The trio will pass by Bogota, Houston, San Francisco and Hong Kong before arriving back in Cebu on Tuesday, March 12.