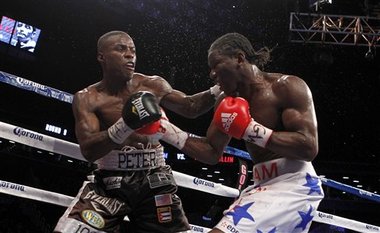 By:  Cory Olsen –  GRAND RAPIDS, MI — WBO Middleweight Champion Peter Quillin acquired his love of fighting on the streets of Grand Rapids and his passion for boxing inside the old Michigan Golden Gloves Association gym on Leonard Street. Saturday will mark his first title defense when he takes on Fernando Guerrero (25-1, 19 KOs) at the Barclays Center in Brooklyn, N.Y.

Although he now resides in New York where he refined his boxing skills, Quillin (28-0, 20 KOs) is quick to talk of his love for his hometown.

“I come from (Grand Rapids), I fight hard for them and I’m very blessed to have all the support I get from the folks there,” Quillin said. “I hope to get another win for them on Saturday.”

Quillin is the fifth world champion associated with Grand Rapids boxing and having his name in the same sentence with Stanley Ketchel, Roger Mayweather, Tony Tucker and Floyd Mayweather is a treat for the 29-year-old.

“It’s a huge feeling I get in my heart that money can never buy,” Quillin said. “I’m still climbing up ladders and my dream is to inspire youth that’s there in Grand Rapids. Quillin scored six knockdowns against previous opponent Hassan N’Dam but will have his fists full with Guerrero, who emphasizes his southpaw style with a vicious left upper-cut and ability to stay in the pocket and trade punches.

“My job is to work hard in training camps,” Quillin said. “I put myself through hell in the gym and when you go out there and try to match (previous) performances you can’t always do that. I hope to have good moments and capitalize on opportunities.”

“When you try to be the best in the world, nothing else matters,” he said. “Being famous doesn’t matter, not one of these things I did were given to me, I had to make them happen myself. I’m blessed to be here and I don’t take anything for granted.”

Quillin’s fight is on the undercard of junior welterweight matchup pitting Danny Garcia vs. Zab Judah.