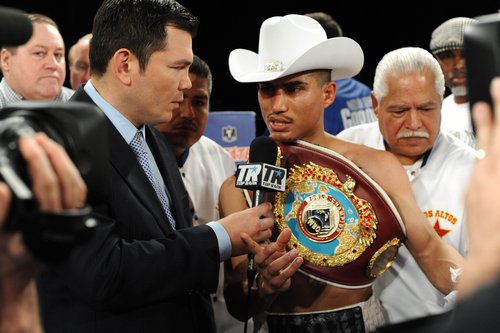 According to Mikey Garcia via Twitter, with a photograph of the contract dated May 1, Garcia will defend his WBO featherweight title on June 15 at American Airlines Arena in Dallas, against Juan Manuel Lopez.

Garcia vs Lopez has been discussed plenty since Mikey’s January win over Orlando Salido, but there was always the belief that the fight would take place at a 128-pound catchweight. The contract clearly states it will be a title fight, with the max weight the divisional limit of 126 pounds.

Garcia (31-0, 26 KO) has thus far been terrific as a pro, and his win over Salido — though cut short due to injury — was a pretty thorough clinic for the majority of the eight rounds it lasted, with Salido down four times and just totally outboxed by the younger man.

Lopez (33-2, 30 KO) is an extremely entertaining fighter, though not the elite talent he was hyped as being during his younger days. Now 29 (and turning 30 on June 30th), Lopez is a known quantity. He’s strong, he’s all-action, and he’s got enormous defensive flaws. Both of his losses came in brutal slugfests against Salido, who stopped him in both 2011 and 2012.