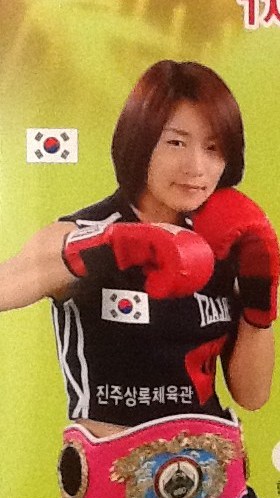 The win improved Hong’s unblemished record to 8 wins with 1 KO in her first defense of the world title he won by dethroning another Thai Teeraporn Pannimit last year in Macao, China.

“The champion proved too much. She was just too good today,” said fight supervisor Leon Panoncillo in an interview at ringside, after the referee stopped the bout sensing the Thai was in clear danger had the fight dragged on.

OneSongchai Gym took the first round by outboxing the tentative reigning champion, but as soon as the second round started, Hong took off like a house on fire, taking the challenger to school with a variety of shots to the head and body.

The Thai’s trainer Michael Du, in a separate interview, said his fighter was in no shape to continue, and accepted the referee’s fine verdict.

This city hopes to promote more WBO fights in the future, and most likely, prodigious Korean banger Mino Kim will be tapped to headline the next event.

“The WBO is made up of very professional officials and supervisor. We want to have their belt. The officials don’t give us any problem, and they are always on time for scheduled meetings and other activities. The best so far,” said Korean Boxing Commission’s Aaron Jang.