The WBO family invites you to participate in the auction of a special item to support a great cause.

By participating in this auction you would not just have the chance to acquire this unique item, invaluable for any boxing or sports memorabilia collector, but you will also be helping raise funds for cancer research and treatment.

All you have to do is take part on the eBay auction by clicking on this link:

All proceeds will go to benefit City of Hope.

ABOUT CITY OF HOPE
City of Hope is an independent research and treatment center for cancer, diabetes and other life-threatening diseases. Designated as a comprehensive cancer center, the highest recognition bestowed by the National Cancer Institute, City of Hope is also a founding .member of the National Comprehensive Cancer Network, with research and treatment protocols that advance care throughout the na¬tion. City of Hope’s main hospital is located in Duarte, California, just northeast of Los Angeles, with clinics throughout Southern California. U.S. News & World Report ranks it as one of “America’s Best Hospitals” in cancer. Founded in 1913, City of Hope is a pioneer in the fields of bone marrow transplantation and genetics. 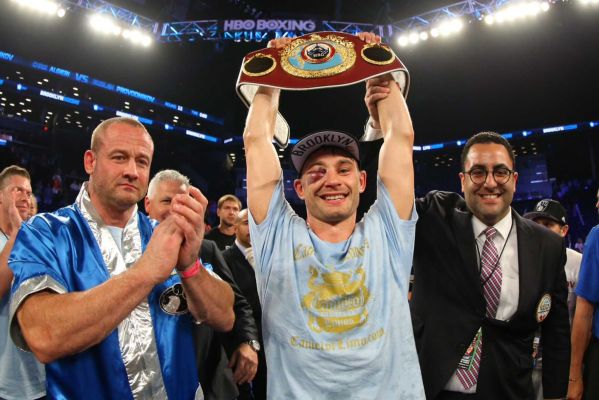 It had all the makings of a storybook upset. Local hero, on his home turf, faces a Russian powerhouse looking for future glory. No one expects the local to be anything more than a steppingstone for the favorite, but he steps in and derails any title hopes in front of the adoring masses.

Sounds like a movie plot. But Saturday night in Brooklyn, it actually happened: a champ grew in Brooklyn.

Algieri, 30, dropped to his knees in his corner as famed ring announcer Michael Buffer shouted the phrase every challenger wants to hear: “And the new . . .”

“I feel great. I showed the boxing world who Chris Algieri was,” he said in the ring after the fight. “As heavy as this title belt is, I don’t even feel it.”

Algieri used his finesse approach all night to eliminate the power of Provodnikov.

Algieri’s only trouble was in the first round, when an uppercut dropped him to the canvas with 1:19 left in the round. But the Huntington hero popped right back up.

“Getting out of the first round was very helpful,” Algieri said. “I had a slow start, but I found my rhythm and was able to anticipate his rhythm.”

With 50 seconds remaining in the first, Algieri went to a knee but stood up quickly.

“I took the knee, not because he hit me, but to clear my head,” Algieri said. “My lip was numb and I wanted to make sure my eye was OK. It was just a precaution.”

Once Algieri weathered the first four rounds, he was able to fully settle in.

“The shots in the first four rounds were his most powerful,” Algieri said of Provodnikov. “But they were few and far between.”

A cut that swelled up over Algieri’s left eye caused him problems in the final four rounds.

“I saw pretty well until the eighth,” he said. “By round 12, I was blind in that eye. I couldn’t see. I was able to anticipate his left hook and his rhythm.”

Provodnikov hit Algieri with a haymaker in the ninth, the first truly hard punch he had landed since the second round, but Algieri stayed on his feet.

In the 11th round, the fight got more aggressive, with both fighters throwing haymakers, but neither going down.

It was a storybook entrance for Algieri, wearing a blue warm-up jacket and a Brooklyn Nets hat. The challenger left a champ.

Brooklyn middleweight Simeon Hardy (13-0, 10 KOs) led off the night securing a TKO over Tennessee’s Malcolm Terry at 1:02 of the second round.