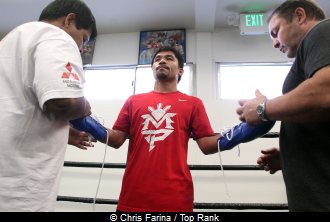 It’s all work and no play for Filipino boxing pride Manny Pacquiao in his first week at the Wild Card Gym training camp and in Los Angeles.

And it looks like the situation will be the same the next 23 days when he fights anew defending World Boxing Organization welterweight champion Timothy Bradley on April 12 (April 13 in Manila) at the MGM Grand Arena in Las Vegas.

“I already foresaw know what will happen even when I was still in General Santos for the first leg of my preparation that’s why I intentionally skipped my first day of workout Monday last week to prepare myself for the long and hard grind.”

“I started Tuesday with the conditioning segment with Justin (Justin Fortune, whom he re-signed as strength and conditioning coach) and he really gave me a helluva day that at the end of the day, all I wanted was have more sleep,” Pacquiao confessed to this writer in a long distance telephone interview.

In the afternoon of the same day, he was at the new Wild Card Gym on the ground floor of the old Hollywood sweat shop, which chief trainer Freddie Roach built precisely for his prized student’s private use.

“I’m happy that Justin has rejoined the team, he will be a great help in my preparation as he was in our first five years together, remember?” he said. “Ngayon pa lang, after only four days of working out with him, maganda na ang pakiramdam ko sa katawan ko.”

“We still have four weeks in our program, so I can’t see any reason why I can’t reach the desired results we’re aiming for,” the only man to win world championships in eight weight divisions and in four lineal categories.

Focus of the program is combining speed in his feet and hands movement and power in his punches, which the Pacman said will be the key to avenging his 12-ropund controversial slit decision loss to the undefeated Bradley and recapture the 147-pound belt he believed was robbed of him nearly two years ago.

“Freddie and I came up with a game plan aimed at mixing speed and power in this coming fight,” he said. “I will be banking on my foot movement to chase him wherever he goes and keep him off balance once I catch up with him.”

“I will force him to come on and fight in frustration and use my power to completely demolish him,” he vowed. “Bradley has often said I already lost my killer instinct and I’m already has been. Well, I’ll show him that he’s mistaken on his perception when we get into the ring.

“The fighting Congressman from Sarangani Province said that if Bradley believes I’ll be the same Manny Pacquiao, whom he fought in 2012, he’s mistaken. And if he believes what he’s been saying against me would strike fear in me, he’s again wrong.

“Everything that I have been doing in my training camp from GenSan to here is aimed at proving just how wrong his perception is,” Pacquiao stressed.

“On the contrary, he’ been driving me to work hard, train hard so I can be a better fighter that in my previous fights,” he said. “Bradley will be fighting the man who stopped Oscar De La Hoya, Erik Morales, Marco Antonio Barrera and Ricky Hatton or even better.”