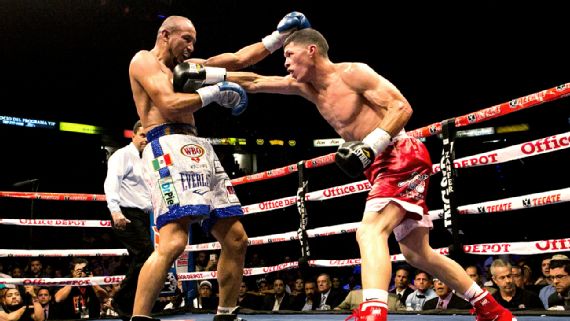 Puerto Rico’s Roman “Rocky” Martinez and Mexico’s Orlando Salido are no strangers to action-packed fights, so when they squared off on April 11 in San Juan, it came as no surprise that they waged a fight of the year candidate.

It was a slugfest from the start. Martinez scored two knockdowns and Salido lost a point for a low blow in the 11th round of a terrific fight. In the end, Martinez held off a late push from Salido and was awarded a unanimous decision — 116-109, 115-110 and 114-111 — to claim a junior lightweight world title for the third time.

It was the kind of fight for which a rematch was a natural, and that is exactly what is happening. But instead of taking place in Puerto Rico again, or giving Salido a chance for revenge in Mexico, they will take center stage in the co-feature on the undercard of pound-for-pound king Floyd Mayweather’s welterweight title defense — and supposed career finale — against former two-time welterweight titlist Andre Berto on Saturday night (Showtime PPV, 8 ET) at the MGM Grand Garden Arena in Las Vegas.

“I am very happy we are fighting in a neutral territory for our rematch, not in Puerto Rico again,” said Salido, who won featherweight world titles three times before claiming a junior lightweight belt last September by knocking out Thailand’s Terdsak Kokietgym in the 11th round of an epic fight of the year candidate that featured seven knockdowns. “I was very prepared for the first fight but the referee wouldn’t let me fight my fight. It seemed the referee was talking to me the whole 12 rounds. I was trying to focus only on my opponent, but I couldn’t.”

“Everyone saw that the first fight against Salido was a true war. This time around, I’m planning to give my fans the same type of fight,” Martinez said. “I predict a nonstop action slugfest.

“I feel the rematch is a very exciting fight for television, the kind fans love. For me, it gives me a chance to leave no doubt in anybody’s mind that I am the champion.”

Said Salido, “Now I know his weaknesses. I am going to attack from the very first moment. I know what to do for the victory. I’m definitely going to regain this title for Mexico. I don’t feel it, I know it. I’m very excited about this fight. This is a very special month for Mexico and in particular because of that, I’m going to get this victory.

“There’s always a very special rivalry between Mexico and Puerto Rico and I feel it, which is why I so badly want to win this title for Mexico.” For Salido’s part, he said he is not making any changes. He’ll come to fight hard, as always, and see what happens.

“I’m not going to do much different other than to gain the victory this time,” he said.

And if Salido gets the win to even the score there will, of course, surely be talk of a trilogy.

“If the fans want a third fight after I am victorious then so be it. Let’s make it happen,” Salido said. “But in my mind I’m coming out only thinking about this fight. That is my only focus at the moment. I want to come out and fight an intelligent fight. I know Roman is going to be at his best, but when he steps inside the ring I want to put on a spectacular performance for all the fans and everyone watching on pay-per-view.”

Said Martinez, “I know it’s going to be a great fight and that if the fans want a third fight then I’m willing to oblige, but it will have to be on my point because I’m going to be victorious yet again over Orlando Salido.”