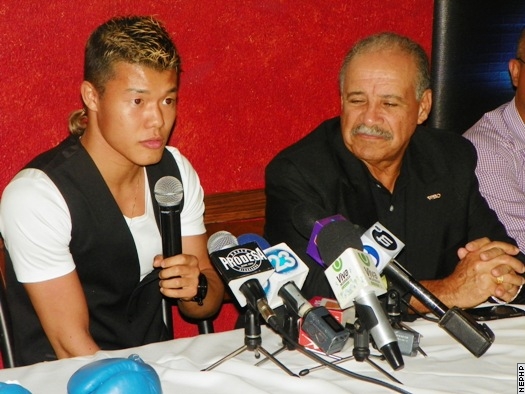 Japanese bantamweight Tomoki “Mexicanito” Kameda (27-0, 18KOs), ranked sixth in the ratings of the World Boxing Organization (WBO), is looking to make history in Nicaragua. On Thursday, Tomoki came to Nicaragua with his father Shiro Kameda, to sit down with Francisco “Paco” Valcarcel, president of the WBO, and other local authorities, to organize a grand event in late May or early June, in which Kameda would challenge WBO champion Paulus Ambunda (20-0, 10KOs) in the country.

Shiro Kameda, the head of the Kameda Clan, said – “One of the main dreams of our company Kameda Promotions, is for all three [of the Kameda] brothers to become world champions this year. We want to set a Guinness record, with all three brothers being champions at the same time. And if WBO supports us in organizing this fight for Tomoki, we would be more than happy.”

“If we do this card, it would be a tribute to Alexis Arguello, and the event should be done before June. So next week it should be determined if the event can be done or not,” said Valcarcel.