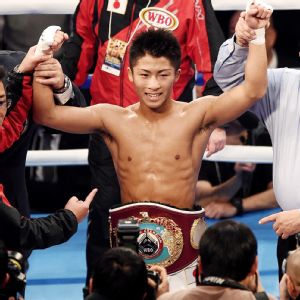 Only eight fights into his professional career, Japanese prodigy Naoya Inoue claimed his second world title in eight months on Tuesday as he scored four knockdowns and blew away junior bantamweight titleholder Omar Narvaez in the second round at Metropolitan Gym in Tokyo.

Although Narvaez, the long-reigning titleholder, fought predominantly at home in Argentina throughout his flyweight and junior bantamweight title reigns, the 39-year-old southpaw was no stranger to going on the road, having made title defenses in Italy, France and Spain and also unsuccessfully challenged then-bantamweight titlist Nonito Donaire in New York in 2011.

The aggressive Inoue knocked Narvaez (43-2-2, 23 KOs) down twice in the first round, flooring him for the first time with clean right hand to the head just 30 seconds into the fight. Thirty seconds later, he dropped Narvaez again with a short left hook to the temple.

Inoue applied heavy pressure for the rest of the round, but Narvaez made it to the bell. He was quickly in trouble again as Inoue dropped him to a knee with a quick counter left hook midway through the second round and then delivered a hammering left hook to the ribs to knock him down for the fourth time. Narvaez dropped to his knees, and referee Lou Moret counted him out as the round was ending, sending Inoue and his corner into a wild celebration.

After making one defense, an 11th-round knockout of Thailand’s Samartlek Kokietgym on Sept. 5 in Tokyo, Inoue, who said he could no longer make weight, jumped up to challenge Narvaez for his 115-pound title.

The loss very well could spell the end of Narvaez’s career. A 1996 and 2000 Olympian, Narvaez turned pro in 2000 and won a flyweight world title in 2002. He made 16 defenses before relinquishing the belt in 2009 to move up in weight. In 2010, he claimed a vacant junior bantamweight title and made 11 successful defenses before losing to Inoue. Overall, Narvaez is 28-2-1 in world title bouts.

Results:   Omar Andres Narvaez lost his WBO Junior Bantamweight Title against Naoya Inoue who defeated him with a second round KO.