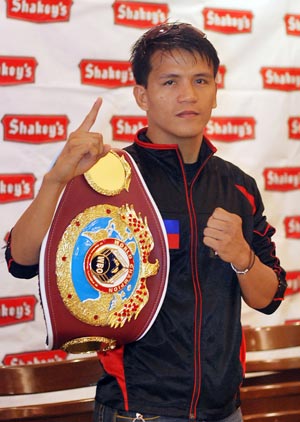 World Boxing Organization minimum weight champion Merlito “Tiger” Sabillo will  make the first defense of his title on July 6, possibly at the plush Solaire  Resort and Casino in the Entertainment City along Manila Bay.

Sabillo is undefeated with a record of 21-0 with 11 knockouts and will No. 6 ranked Jorle Estrada of Colombia in a voluntary defense.

The 24-year-old Estrada who is five years younger than Sabillo has a record of 16-6 with 5 knockouts.

The hard-hitting Sabillo won the WBO Interim title with a stunning 8th round TKO over heavily favored Luis De La Rosa who was fighting before his hometown fans in Colombia but couldn’t handle the aggressive Filipino in an all-action clash from the very first bell.

De La Rosa was cut in the opening round but it only fired him up and he rocked Sabillo a couple of times with some big shots but the courageous Filipino refused to back off and gave as good as he got.

Sabillo turned the fight around when he dropped De La Rosa with a big right hand in the 8th round  and although he beat the count the Colombian was in serious trouble prompting Sabillo to go after him and drop him again with a wicked left.

De La Rosa beat the count but was clearly in no position in continue forcing the referee to call a halt at 2:58 of the round.

Sabillo was elevated to full champion after Moises Fuentes who was struggling to make the 105-pound limit relinquished the title and moved up to light flyweight where he failed to wrest the title from long-reigning champion Donnie “Ahas” Nietes who retained his title in a majority draw.