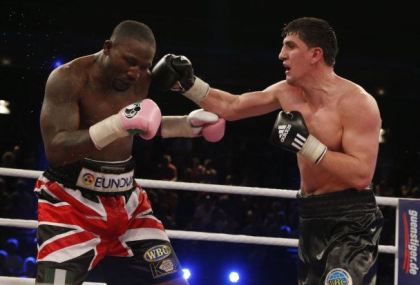 Marco Huck is still the WBO Cruiserweight World Champion. Before a massive crowd of 5,000 spectators at Max-Schmeling-Halle in Berlin, Germany, he beat the previous interim titleholder Ola Afolabi. It was not the win itself that was so surprising but the way the 28-year-old achieved it. Throughout the whole twelve rounds he showed a disciplined performance and won on points by scores of 117:111, 115:113 and a confusing 114:114. After a short-lived feeling-out it was the defending champion who took control with eye-catching combinations, which rattled his challenger. Afolabi tried to tire out Huck, by aiming for the German´s body most of the time but without much effect. Instead it was the Briton, who tired late in the championship rounds. Besides putting his well-known warrior’s mentality on display, Huck was counter-punching Afolabi for most of the fight.

Huck’s coach Ulli Wegner agreed with his prodigy: “I can only praise Marco for this win. The way he fought from the beginning to the end was close to a perfect performance of him. Afolabi might be the more refined boxer of the two but tonight he lost against the better man and the better strategy.”

“I gave my best but it wasn´t enough. Huck is the rightful winner as I have no excuses at all,” Afolabi confirmed afterwards, his third loss in 25 fights. His coach Fritz Sdunek was also disappointed: “I thought that Ola might pull the fight around in round ten but Marco upset our plan.”

Huck, who now has 36 victories to his name, feels ready for a rematch against mandatory challenger Firat Arslan, who was watching from ringside. “I want to give the fans some even more spectacular fights and prove that I am able to beat everyone in convincing fashion.”