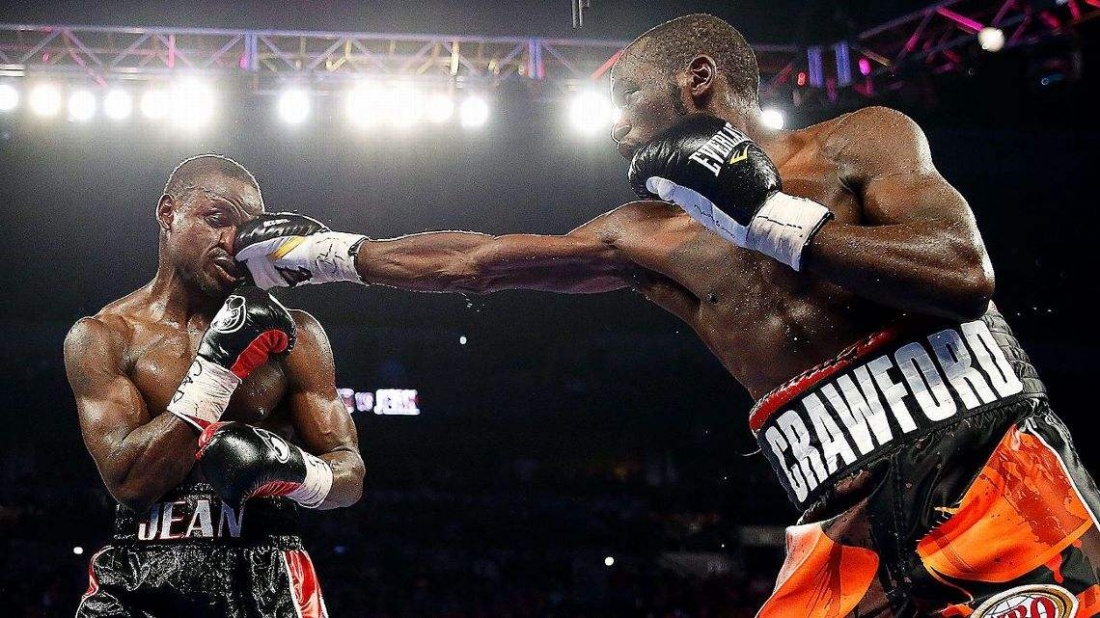 Undefeated world champion broke down Dierry Jean on his way to a 10th-round stoppage. (Photo:  Getty)

Terence Crawford successfully made the first defense of his newly acquired WBO junior welterweight title by stopping Dierry Jean on Saturday in front of hometown crowd at the CenturyLink Center in Omaha, Nebraska.

The end of the bout came in the 10th frame after referee Tony Weeks called a halt to the contest at 2 minutes and 30 seconds of the round to save Jean from continued punishment. Jean (29-2, 20 KOs) had been down twice in the fight, once in the first round and again in the ninth.

“When I’m at home I feel revived, I feel the electricity,” Crawford told HBO’s Max Kellerman during his post-fight interview. “I just want to go in there and put on a good show.”

And that he did. Crawford (27-0, 19 KOs) commanded the action from the opening bell behind a southpaw stance and an active, pawing right jab that systematically broke down a game but ineffective Jean and left him open to solid right hooks and combinations. Jean landed sporadic straight rights from the distance, but spent the majority of the fight on the defense and trying to get passed the champs jab.

CompuBox numbers had Crawford landing 169 punches out of 533 thrown, Jean landed 51 out of 340 thrown. The fight opened with the boxers meeting in the middle of the ring and feeling each other out with long distance jabs, Crawford in an orthodox stance. Both vied for positioning and dominance for the first half of the round, but it was Jean who took the first step back. Crawford tried out the southpaw stance for size and found a good fit as he knocked Jean to canvas with a hard right.

Crawford came out in a southpaw stance for the second round and stayed that way for the rest of the fight. They pawed at each other with the their lead hands in the middle of the ring, before Jean finally took to the perimeter, slowly circling counter-clockwise and pressuring behind an active jab. This began to set the tenor for the rest of the encounter.

The following round continued with the established tendancy, Crawford pressing forward and landing right jabs and hooks and occasional combinations, with Jean on the back foot and lunging with his right hand periodically and getting caught in the corners or against the ropes.

The eighth round brought back memories of the recent Timothy Bradley vs. Jessie Vargas debacle, when ref Pat Russell prematurely stopped the fight after confusing the 10-second warning with the last bell of the fight. This time it happened to Tony Weeks, who may have saved Jean, who was being pummeled at the end of the round, from a kayo by stopping the action of the eighth round at the 10-second warning.

In the ninth round, a straight left from Crawford created an opening and champ capitalized on it by following up with a 1-2 that knocked down Jean for a second time in the fight. Crawford came looking to close the show in the 10th round, backing Jean up against the ropes and landing with combinations to the head and body. Crawford was on the hunt and serving up the offense as the end of the round neared. He caught Jean with a 1-2-1 combination that put the challenger on the run, Crawford caught up and landed two hard lefts, and that was all the referee had to see to wave off the rest of the fight.

Having defended the lightweight title twice, by knocking out Cuban phenom Yuriorkis Gamboa and handily outpointing Raymundo Beltran, 28-year-old Crawford moved up in weight to the junior welterweight 140-pound division and stopped Thomas Dulorme in April to claim the vacant WBO title which he defended on Saturday.

With word on the street that Top Rank CEO Bob Arum is looking to pair up Crawford with another of his star fighters, none other than the might Manny Pacquiao, Max Kellerman asked Crawford for his thoughts on the possible match.

The crowd loved it.

Fighting out of Montreal, Canada, Dierry Jean, a native of Port-au-Prince, Haiti, entered the fight having outpointed a fading Jerry Belmontes in June and KO’d Dominican journeyman in March of this year.

Before Saturday’s loss, Jean’s sole professional defeat had come at the hands Lamont Peterson in January of 2014. The 33-year old, who entered the ring ranked No. 2 by the World Boxing Council (WBC) and No. 6 by the WBO, holds wins over Cleotis Pendarvis, Lanardo Tyner, and Ivan Cano.