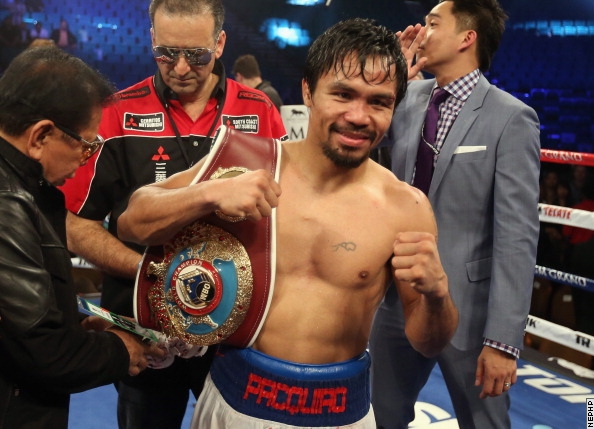 The worst thing you can ask a fighter if you are in search of an honest answer is what he plans to do with a win in his upcoming fight. The response most often offered will be that they are focused on nothing other than the fight in front of them, and that all bets are off until the outcome is decided.

That’s why fighters have promoters and managers – so they can plan the next move. When they are in the mood, they can even talk about it as well.

So when Juan Manuel Marquez and Mike Alvarado insist that the only thing that matters right now is their head-on collision on May 17, we have to respect their response. After all, both fighters are coming off of a loss – Marquez dropping a close but clear decision to Tim Bradley, while Alvarado suffered a heartbreaking stoppage defeat in a Denver homecoming versus Ruslan Provodnikov.

Needless to say, a second straight loss could prove damaging to either boxer. A win, however, immediately puts that fighter back into the title mix. Given what’s at stake in this fight, it’s a hell of a prize to claim to ignore until after the fight.

But at least their promoter is talking.

“Well, I’m not the one fighting,” quipped Hall of Fame promoter Bob Arum, whose Top Rank company presents this weekend’s action at The Forum in Los Angeles. “So, the first thing I did was talk to Manny Pacquiao, and he’s up to fight the winner.

“There’s nothing contractual with the winner of the two fighters on Saturday. I will offer the fight to the winner and it’s up to them to accept it or reject it.”

It’s hardly happenchance that such a fight is being offered for this weekend’s winner. In addition to promoting all three fighters, Arum secured sanctioning for the fight – which takes place at a contracted maximum weight of 144 lb. – to serve as an official title eliminator for the right to challenge for Pacquiao’s belt.

Pacquiao reclaimed his place among the best welterweights in the world with a convincing 12-round points win over Timothy Bradley Jr. last month in Las Vegas. The win avenged a highly controversial defeat suffered nearly two years prior, though the Filipino southpaw was later forced to overcome a far more damaging blow to his career when Marquez knocked him out cold in their 6th round of their Dec. ’12 war, which was honored as Fight of the Year.

Alvarado is new to the mix, having yet to fight any of the aforementioned welterweights. Marquez and Pacquiao, on the other hand, have one of the longest running rivalries in the sport’s history. Dating back to their first fight just over ten years ago, there has been little to separate the two in each of their four encounters, with the exception of Marquez’ conclusive knockout ending in their last fight.

Fans have forever disputed the outcomes of each of their previous three encounters, in which they fought to a draw, followed by two close, controversial decisions narrowly won by Pacquiao.

Marquez spent most of those years chasing one more fight with Pacquiao to settle the score, which he was finally able to do last time around. He had even reached a point in his career where he saw little reason to continue if a fifth fight with one of the two biggest superstars in the sport couldn’t be made.

Yet through it all, May 17 is all that matters if you ask the future Hall of Famer.

“All I’m thinking is first things first and that’s May 17,” Marquez (55-7-1, 40KO) insists. “After I win this Saturday, if (a 5th fight) with Pacquiao is there, it’s there. I just want to have this fight on Saturday and it goes from there.”

His opponent was a little more forthcoming in at least acknowledging what awaits the winner.

“This is a huge opportunity. We’re both coming off of losses, but this fight is going to lead to a bigger fight,” Alvarado (34-2, 23KO) said of the reward that will come with Saturday’s bout. “It means a lot to both of our careers. It helps motivate me to train that much harder, knowing that I’m in a category with the best of the world.

“I’m happy, I’m excited and I’m ready for this show to begin this weekend.”

Alvarado has every reason to be anxious to move on to his next fight. The Colorado boxer has lost two of his last three contests, with both losses coming in brutal slugfests. His first defeat – a 7th round stoppage versus Brandon Rios in their Oct. ’12 war – was avenged five months later, but fell into the same kind of trouble against Provodnikov last October.

Worse than the actual loss itself, Alvarado’s dramatic decline in the fight coupled with the manner in which the bout developed and ultimately ended raised concerns from those closest to him about his health, including requests of retirement from his loved ones. Alvarado insists such talks have no place in his career at the moment, although he took such feedback in the most uplifting manner.

“They just want to make sure I’m safe, that I’m OK. They are my number-one supporters and as long as I know they’re there for me, I’m OK.”

Being repositioned for a potential title shot despite coming off of a knockout loss let Alvarado know that he has more than just his family in his corner.

“I was surprised,” Alvarado admitted of the chance to fight in a title eliminator. “But it also tells me that Top Rank has my back. I’m ready to step up to the plate and put on a better show. I’m ready to redeem myself and put on a good show. That’s what this weekend is all about.”

As far as Marquez is concerned, this weekend is all about pleasing the fans. Entertainment comes first, with business to be discussed whenever he feels the time to be appropriate.

“This fight will be a war,” Marquez guarantees, about as far into the future as he wishes to predict. “He likes to fight. I like to fight. The people win because the people want to see this type of fight.”

Should Marquez win, the fight those same people – and millions of others – would like to see him take another run at a major title. Including the title he was practically given at 140 lb., Marquez has won belts in four weight classes and – three months shy from his 41st birthday – believes time remains on his side to add to that total.

“Obviously that’s what I want to do – make history by winning a title in five weight classes, something no other Mexican fighter has ever done,” Marquez admits.

With that in mind, how can he NOT help but look ahead of Alvarado and towards the future?

“It’s not difficult for me. I feel right now like I am fully concentrated on Mike Alvarado,” Marquez promises. “Maybe in the future I will have “the most” important fight of my career. But right now, I’m only thinking about Mike Alvarado.”

In the meantime, everyone else is thinking about what will come next.

“Manny has agreed to fight the winner,” Arum reiterates. “I will say that pretty much once we get the terms worked out, it will be a done deal.”