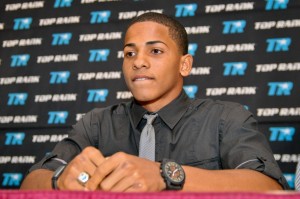 After a successful tour of fights along the east coast of the United States, “El Diamante” returns home for the first title bout of his professional career. Fully recovered from the injury on his left hand, rising Puerto Rican star Felix “El Diamante” Verdejo will battle for a World Boxing Organization (WBO) regional title on an April 25 card that will take place at the Mario “Quijote” Morales Coliseum in Guaynabo.

“For me there is nothing better than representing Puerto Rico, honoring my flag and bringing joy to my Island. I’m more than happy and thankful with Top Rank for the opportunity of fighting for a title in front of my people,” said the young prospect that is considered by many as ‘The Next Big Thing’ in Puerto Rican boxing. “I am very grateful with the fans on the Island for the unconditional support they have always given me and that’s why I wanted to give them my first title fight,” said the sensational boxer that was selected by ESPN.com as “Prospect of the Year”.

In what will be his first in-ring appearance of 2015 and his first fight in Puerto Rico since August of 2014, Verdejo, who is undefeated with a record of 16-0 and 12 knockouts, will battle for a WBO regional title against Mexico’s Marco Antonio “El Kua Kua” Lopez (24-5, 15 KO’s) in a 10-round duel in the lightweight division on the main the main event of the “Solo Boxeo Tecate” card that will take place on April 25 card at the Mario “Quijote” Morales Coliseum in Guaynabo.

“Puerto Rico’s favorite son returns to his Island and his fans on April 25 for his 2015 debut and the first title fight of his promising career. We are looking forward to working with Diamante Promotions to continue developing the career of this young talent on the Island. We know this will be a great night of boxing headlined by ‘El Diamante’,” said Carl Moretti, Vice President of Top Rank.

“I want to thank Top Rank for giving us the opportunity of being the partners in Puerto Rico of the world’s leading promoter. Diamante Promotions will become the local promoter of the most beloved rising athlete on the Island and whom I consider my little brother, because I saw him grow and develop from scratch,” expressed Jason Marquez, President of Diamante Promotions.

Verdejo added: “Thanks to God I feel fully recovered from the injury on my left hand. The rest came in handy, but the vacations are over,” said a laughingly Verdejo. “Despite the rest, I kept running in the mornings. I’m ready to return to the gym to prepare and get ready to bring that title to my people”.

Ricky Marquez trainer and manager of Verdejo, said: “We are just at the beginning of training camp. I know we will be training hard, and it will get ‘harder and harder’ as I always say. I wanted to make sure that the injury that Felix suffered healed 100% for his first ten-round bout. I’m sure ‘El Diamante’ will be ready to shine and conquer that title on April 25″.

Tickets to the card that will be presented by Top Rank in association with Diamante Promotions are priced at: $100, $70, $30 and $15, plus applicable charges. Tickets will be on sale on Friday, March 13 and can be purchased at TicketCenterPR.com or by calling (787) 792-5000.

The card will be televised from coast to coast in the United States by UniMas and in Puerto Rico by Univision Puerto Rico.