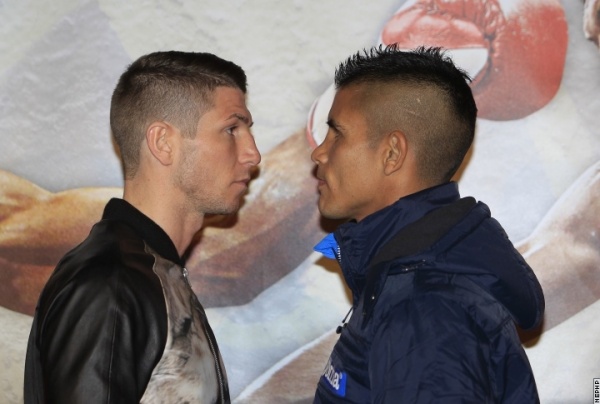 Highly motivated and with the confidence of what he defines as the best preparation of his career, Argentinean and World Boxing Organization (WBO) Latino junior middleweight champion, former world title challenger Javier “La Bestia” Maciel, had his first face to face with Englishman Brian “The Lion” Rose, before their highly anticipated WBO junior middleweight world title final eliminator, that will take place on Saturday, October 26th., at the Motorpoint Arena in Sheffield, England, televised live by TyC Sports in Argentina and lots of parts of America, Sky Sports in the United Kingdom, and AWEtv and AWEtv.com (3 p.m. ET). In a packed jammed press conference on Thursday afternoon, with his motivation high as ever after finishing his intense training camp in Las Vegas where he stayed for three weeks, Maciel (27-2, 20 KOs), ranked WBO junior middleweight #5, and International Boxing Federation (IBF) #7, expressed his confidence for his fight against Rose (24-1-1, 7 KOs), current WBO intercontinental junior middleweight champion, ranked WBO junior middleweight #4 and World Boxing Council (WBC) #16, who also said his words. Highly optimistic, both of them made clear what they are here for: get the victory that will put them on the #1 spot of the ranking and become mandatory challenger of the vacant title that will dispute Armenian-born American Vanes Martirosyan and American Demetrius Andrade on November 9th. But for that, “The Beast” and “The Lion” have to take a big step before. “I am very pleased to be here, for such an important fight like this eliminator. I came a long away from Argentina, to get everything. I come very well prepared, in a wonderful condition and in the best moment of my career. He is a good boxer, but I see myself stronger than him, and I’m ready”, said Maciel, who arrived from Las Vegas together with known trainer Miguel Diaz, and joined the rest of his team, headed by his manager and promoter, Mario Margossian, head of Argentina Boxing Promotions, his trainer Eduardo Molina, his assistant Gustavo Garay Rezola, his doctor Alberto Centanaro, his physiotherapist Cacho Latrónico, and Club Atletico Velez Sarsfield’s bursar Daniel Ramundo.

“I made the best preparation ever, the best in my life. The workouts in Las Vegas were very demanding, and I had first level sparrings, so I am in an excellent shape. We have watched several of Rose’s fights and studied him.  He comes forward, solidly, he looks for the fight, always with a high and closed guard, in a compact way, which makes it difficult to connect him. I go forward as well, so it will be a nice fight. And it doesn’t matter he is fighting at home, I am ready to beat him”, added the 29-year-old Maciel, who after making the distance against WBO middleweight world champion Dmitry Pirog in Russia, on March 2011, went down to the 154 pounds -his real division- where he finished eight of his last nine victims in less than five rounds.

Without being any less, Rose took the microphone and said his words. “This is a massive fight. As I said before, it’s a 50-50 fight on paper. It’s going to be a great fight, that anyone can win, but I feel more than capable of winning”, said the 28-year-old Blackpool favorite, who was with his whole team, headed the Eddie Hearn, head of Matchroom Boxing, promoter of the event.

“I have watched him, and I think technically I’m a lot better. It’s just about putting that on practice on Saturday night. All the hard work is done. I’m not going to hold anything back, and I’m going to show to everyone on Saturday and prove that I belong on this stage”, stated Rose, who has knocked out former world champions such as Vivian Harris and Joachim Alcine.

But Maciel, who was named Latino Boxer of the Year by the WBO, and comes to this challenge after stopping in five rounds his countryman Alejandro Falliga, to defend his Latino belt for the fifth time on September 7th. at the Luna Park Stadium in Buenos Aires, has clear what he has to do.