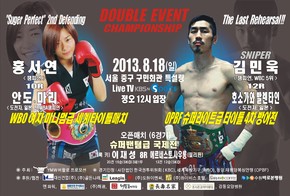 In recent years Korean boxing has gone down hill. The glory days of the 1980’s with the likes of Sung-Kil Moon, Myung-Woo Yuh and of course Jung-Koo Chang are nothing more than a distant memory.

The 90’s whilst no 80’s for Korean boxing, are also long forgotten in the minds of many as the likes of Young-Kyun Park, In-Jin Chi and Yo-Sam Choi are the last generation of great Korean boxers. At least in terms of the men.

Thankfully Korean boxing has been kept alive by a number of female fighters. Of course the two most famous are North Korean defector Hyun-Mi Choi and actress-turned-amateur boxer Si-Young Lee, though they are far from the only 2 and another notable name is Su-Yun Hon (8-0, 5) the unbeaten WBO Minimumweight champion.

Although not as well known as either Choi or Lee, Hong is a fighter who is starting to make a name for herself as her career begins to gain some traction.

Despite having been a professional since January 2010 Hong’s career has been a bit of a slow burner with just 2 fights in both 2010 and 2011. In those four early bouts however the talent of Hong was evident as she took 2 clear decisions and two stoppages, barely dropping a round in the 4 bouts combined.

It wasn’t until 2012 that Hong began to break out as she scored a trio of notable victories over Thai opponents.

They began with Hong stopping both Napaporn Superchamps and Fahpratan Looksaikongdin. The victory over Looksaikongdin being a genuinely notable one as she claimed the WIBA Light Flyweight title.

Although WIBA are regarded as an “acceptable” title in female boxing it’s fair to say that the big 4 are still the ones to get. The WBA, WBC, IBF and WBO females titles still tend to get more recognition than the likes of the WIBA, the WIBF and the WBF. In fact if you look at the top fighters in female boxing it’s the big 4 titles that every top fighter looks to fight for

In June 2012 Hong would get her hands on one of the “Big 4” as she traveled to Macau and took on her third successive Thai, Teeraporn Pannimit, in a bout for the WBO Minimumweight title. This would be Hong’s first fight out of Korea and her first contest at the Minimumeight limit of 105lbs, a weight she made relatively easily weighing in at 104lbs.

Although Hong entered her bout with Pannimit having fought just a total of 23 rounds she showed off her skills and movement by taking a clear cut decision over the Thai. The bout, the highest profile contest of Hong’s career to that date, was so impressive that it caught the eye of boxing scribe Steve Kim who described her as both “classy” and as having been one of “the two fighters who really stood out on the card“, alongside IK Yang.

Since defeating Pannimit for the WBO belt Hong has defended the title once, defeating yet another Thai, in the form of Buangern OnesongchaiGym. OnesongchaiGym was riding an 8 fight winning before being stopped in the 5th round by Hong who was again impressive despite the fact her opponent wasn’t as good as advertised.

Hong will be looking to make the second defense of her title on August 18th when she faces former WBA Atomweight champion Mari Ando (10-5, 5) of Japan. This bout is a genuine step up for for Hong though one that carries a lot of reward with Ando being a recognised former champion her self. If Hong fights to the best of her ability she should manage to take a decision, though this bout is certainly not a forgone conclusion with Ando always being dangerous if she lands.

We’re expecting the Hong v Ando bout to be televised on an upcoming show that will also features the very exciting Min-Wook Kim, a fighter we’re very big fans of. The picture at the top of this article shows the fight poster for the Hon/Kim card from August 18th.