Huck-Afolabi on May 25th in Germany, DKP Wins Bid 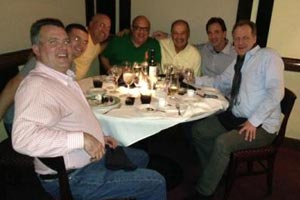 In the photo before the purse bid: From left to right Tuto Zabala, Jr, Tutiking Zabala of All Star Boxing, Joe Hernandez of the WBO, Ricardo Rizzo of Rizzo Boxing, WBO President Francisco “Paco” Valcarcel, Tom Loeffler of K2, and Chris Meyer of Sauerland Event.   (By Fightnews)

Article by Rick Reeno from Boxingscene

Don King came out swinging this morning at the WBO’s purse bid. According to Chris Meyer, general manager for Sauerland Event, promoter Don King slammed down a bid of $1,500,000 million dollars to secure the promotional rights to the Marco Huck (35-2-1, 25KOs) vs. Ola Afolabi (19-2-4, 9KOs) trilogy match. Sauerland Event, who promote WBO cruiserweight king Huck, put down $914,444. K2 Promotions, who handle mandatory challenger Afolabi, put in a bid of $375,000.

King advised the World Boxing Organization, and the involved parties, that he plans to stage the fight on May 25th in Germany.

Next to the Klitshcko brothers, Huck is arguably the highest boxing draw on German television. Logically, King will now attempt to stir up a financial tug of war between the various television networks in Germany. Every major network in Germany is sure to be interested in securing this fight.

Huck won a close twelve round unanimous decision over Afolabi in 2009, and last year they met in a rematch that went to a twelve round draw.