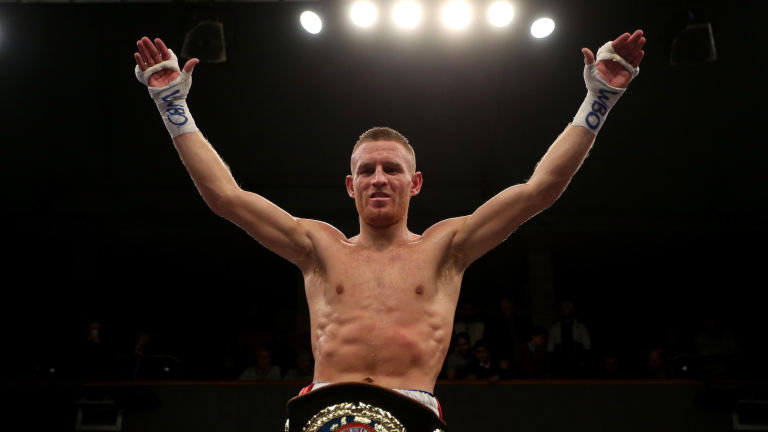 Manager Steve Wood is confident Terry Flanagan will beat Jose Zepeda to the WBO world title on Saturday and go on to prove he’s the best of a packed British lightweight scene.

But as Flanagan prepares to put his unblemished 27-0-0-KO10 record on the line in front of his home fans at Manchester’s Velodrome, Wood believes the 26-year-old southpaw can emerge victorious and progress to unifying the division against domestic rivals.

Wood said: “In the lightweight division, we’ve just had Mitchell fighting for a world title and we’ve got Derry Mathews as an interim, Anthony Crolla fighting too. If you look at their opponents, if we’d had to pick then we wouldn’t have picked this. I think we’ve got the hardest fight.

“Hopefully Crolla can win and then with Mathews, we can put them all together if Terry wins. I’m more than confident that Terry is the best lightweight in the UK at the moment. If he wins this and can start unifying against domestic opponents, they’d be big sellers. If he wins this and can start unifying against domestic opponents, they’d be big sellers.

“I wish we were fighting Crolla or Mathews this week, then I wouldn’t be as nervous as I am now!”

On the hometown advantage, Wood said: “I’m confident that Terry will respond to the crowd in the right way. He’s sold 1,000 tickets himself and they’re all local. They’ll be walking out of the pubs and going over there so the atmosphere is going to be electric.

“Terry will respond to it and Zepeda has never fought away from home so hopefully it will pick Terry up and have a negative effect on Zepeda.

“We could have gone to America for a lot more money than we’re taking in the UK so it shows we wanted this fight at home. The crowd can be the difference between winning and losing and I’m sure the crowd will raise Terry’s game.

“Terry is a level-headed kid and he won’t get carried away. It’ll lift him but it won’t affect what he’s going to do.”

Zepeda is also unbeaten with a 23-0-0-KO20 slate and has caused a stir in America with some emphatic knockouts, stopping his last four opponents inside three rounds.

“Zepeda is an unknown quantity,” said Wood. “We’ve seen he can box and move. He doesn’t just throw haymakers – he can be subtle and he sets up his work. He’s no mug or just a kid who throws big punches. “We’re confident in everything we’ve done. We’ve done it right and it’ll be the best Terry Flanagan that’s ready.

“We don’t know much about Zepeda apart from the fact he’s a big puncher. He’s never made the weight before so we’re not sure if he’ll be comfortable – especially in the later rounds. He’s had 20 knockouts but we don’t know about the quality of the opposition.

“Is it going to be another Jeff Lacy? An American superstar coming across here who’s not as good as he thinks. Joe Calzaghe, a southpaw, gave him a boxing lesson. We’re hoping Terry can do the same.

“We’re going to see what Zepeda is like. He might need to be pushed back but we’re going to adapt to the situation because he can box as well as punch. We’ll either go with plan A or plan B.”